Like other titles bearing the name, Slingo Rainbow Riches takes place in Ireland, with an idyllic Irish meadow creating the backdrop for the game’s action. The popular leprechaun character that has become a mascot for the franchise makes his appearance, encouraging you with little shout-outs that are accompanied by an upbeat Irish jig.

As a Slingo game, there is just the one traditional reel involved, with the main game happening on a 5x5 bingo grid. The title has a 96% RTP and has been given a medium volatility rating by Slingo Originals.

How To Play Slingo Rainbow Riches 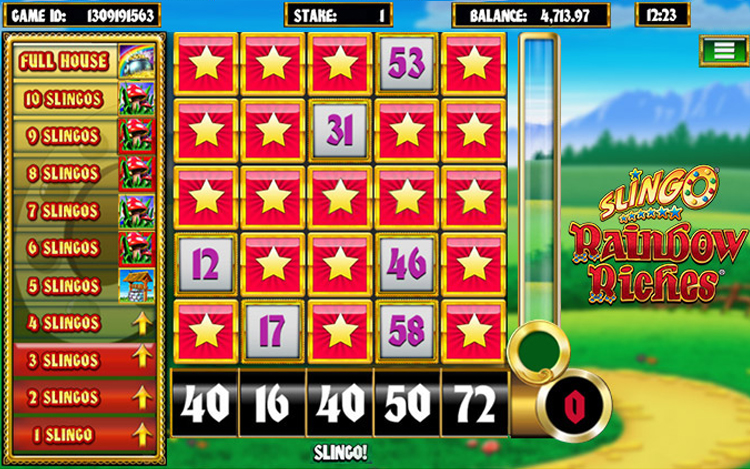 For those who’ve not played a Slingo game before, the premise is fairly simple. The game combines elements of online slots with bingo, hence the name. In the Slingo Rainbow Riches online slot game, there is a 5x5 grid with a single reel underneath it.

The game can be played from £0.10 up to £2. This may seem like a small range but this is common in Slingo games, which are more in line with instant-win and bingo titles than slots in this respect.

Each turn on Slingo will give you 10 spins of the reel underneath. Numbers will land on each spin, and some of those will correspond with numbers on the grid. The aim of the game is to complete rows on the bingo grid and score ‘Slingos’. Each Slingo will see you advance up a ladder on the side of the screen, with a certain amount triggering wins. 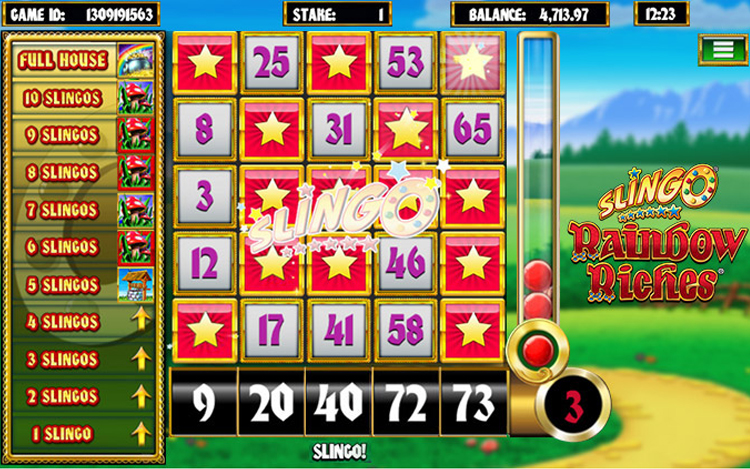 Slingo Games are not like traditional slots in that they don’t tend to feature a huge number of particularly innovative bonuses. There are, however, several useful symbols that can land on the reels that can help improve the game and create more winning opportunities.

Landing a free spins symbol on the reel will add an extra spin to the overall spin count. These extra spins will then play out when you have finished with your standard 10 spins. These can be particularly useful if you need just one or two numbers to secure a Slingo and land yourself a win.

The Joker Wild symbols can land on any spin. When they land, you will get to choose a symbol on the reel above them to tick off. This can be a really useful way of filling lines and can also be used tactically to help your advancement in the game. Be careful of the red devil though, he offers nothing to the game and just takes up a spot on your reel for nothing.

As well as the standard Joker Wild, there is also the advanced Joker Wild. For this one, players can choose any position on the reels to unlock instead of just on the one reel.

As you can see throughout this Slingo Rainbow Riches review, this title is very different from your standard online slot game. Those who enjoy bingo and slot games and are looking for something that combines the two are going to fall head over heels for this. The gameplay here is engaging and the graphics are simple but charming. The game also looks great on mobile devices and is definitely one of the most enjoyable Slingo titles at Mega Casino.