The iconic board game Monopoly has become an incredibly popular source of inspiration for slot developers, and it’s easy to see why. The game’s set-up allows them to get creative with bonus features, and that is definitely on display in the Monopoly Big Event slot game from Barcrest. This title mixes features from the classic Monopoly board game with some highly volatile gameplay for some fascinating results. Let’s roll the dice and find out all about it in this Monopoly Big Event slot review.

Fans of the Monopoly board game are going to love the design of the Monopoly Big Event slot game. The game’s 5x3 reel grid has been designed to look as though it is an actual Monopoly board, with each of the five reels being in the trademark green colour with a golden rim. The symbols on the reels are also there to please Monopoly fans, with the dog, boat, car, and other classic Monopoly figures making an appearance.

The game has also been fully optimised to run on mobiles. The Monopoly Big Event mobile slot is just as fun as the desktop version, only with the added convenience of being able to take the game out and about with you.

How To Play Monopoly Big Event 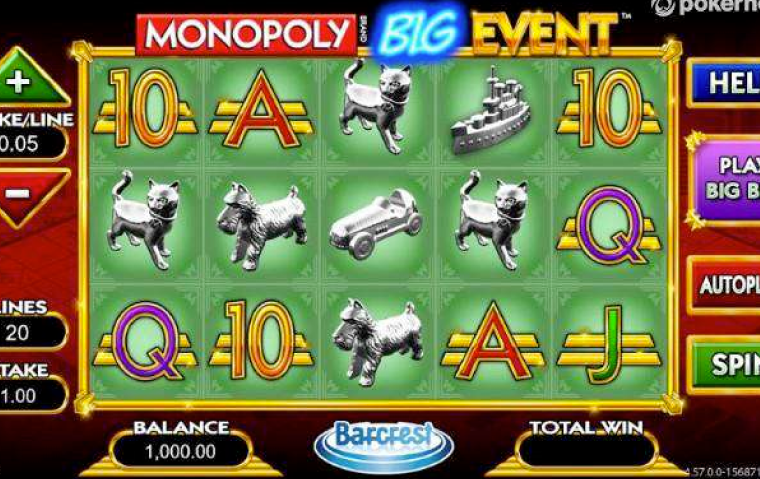 As a newcomer, the game of Monopoly can always appear quite daunting. Thankfully, the Monopoly Big Event slot is far from that, with Barcrest opting for some really simple gameplay mechanics to help get players involved in the game.

There are 20 paylines fixed across the slot’s 5x3 grid, and players will need to select their stake per line before they start. This is done by clicking on the +/- buttons located on the left-hand side of the reels. All of these controls are identical when playing the Monopoly Big Event mobile game. The minimum bet value is £0.01 per line, and the maximum is £25. This gives a full betting range of £0.25 up to £500, which is huge. Players can land a win of 500x their overall stake. The RTP of the slot is 96%, but using the Big Bet feature can optimise this all the way up to 99%, which, needless to say, is a very attractive number. 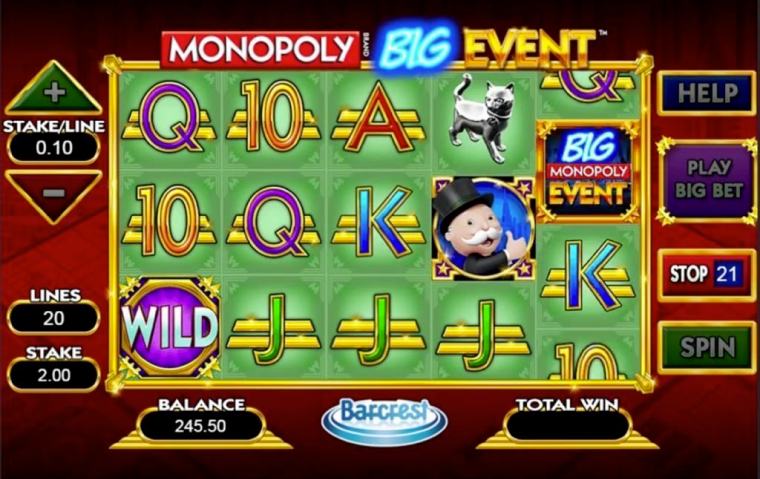 The Monopoly Big Event, as its name might suggest, is all about going big. The biggest way to do that in the game is using the Big Bet feature. This is used to launch several of the bonus features in the game.

The Big Bet feature allows players to bet £20 or £30 to activate the chance of some bigger bonus feature.

At the start of the £20 game, a progressive multiplier is attached to the game, starting at 1x and going up by one each spin until it reaches 5x.

At the start of a £30 Big Bet Spin, a bonus wheel will be spun to determine which bonus the players will get. A progressive win multiplier as with the £20 spin, the Epic Spins bonus which adds a 5x multiplier to every spin, or the Persisting Wild Bonus, which lacks wilds in place for the duration of five spins.

The Bonus Spins are triggered by landing the big event symbols on the reels. During this, players get to choose which strategy they take. Players have to choose from cards and can take reveals of these. The locked wilds will see wilds lock in place for the duration of the spins, while the Dancing Wilds will change the reel on each spin that is wild.

The Monopoly Big Event slot game is going to be massively attractive for players who enjoy highly volatile slot games with big winning potential. The Big Bet feature may deter some players, but those who enjoy a highly volatile option will definitely want to take this for a spin. Fans of Monopoly are also going to fall in love with the game’s design and general gameplay.