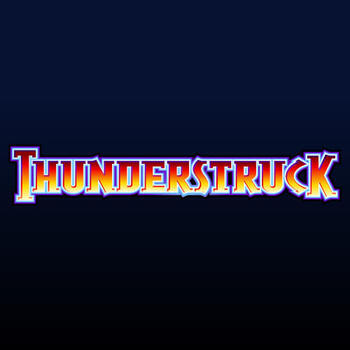 Be prepared to encounter Thor, the God of Thunder, like you’ve never seen him before. The Asgardian God is brought to life by Microgaming in the hugely entertaining Thunderstruck slot game. Thor is all-mighty and powerful, and he bestows plenty of winning opportunities onto those who dare to spin his reels. Grab the hammer and see if you can get lightning to strike by spinning the reels in this engaging online slot at Mega Casino. Thor has become a staple of popular culture in the 21st century thanks to his appearance in multiple movie franchises as well as other popular culture mediums. This version of Thor though is not the sun-tanned, muscle-bound one you all have in mind. This is the original Thor - complete with long blonde flowing locks, Asgardian helmet and the might of Asgard behind him.

The Thunderstruck slot game was developed by Microgaming back in 2004. It was a success for the company and spawned one of the most popular slot games of all time - Thunderstruck II. The original is still an iconic game though.

The game brings Thor and Asgard to life in a comic-book style. Thor, Mjollnir and many other well-known elements of his story are all brought to life in a way audiences may never have seen before. The reels spin high above the sky in the dead of night, with thunder crashing and a huge storm brewing. It combines with a thunderous soundtrack to give the game an exciting feel.

How to Play Thunderstruck Slot Online

You won’t need to have the skills of an Asgardian slot to get to grips with the Thunderstruck online slot game. The action unfolds over a standard five-reel by three-row grid. There are nine paylines that are active on every spin. Players can place a maximum of 5 coins across each line.

Any information you need about the game can be found by clicking on the burger menu icon on the left-hand side of the screen. This will open a small panel that will give you access to the paytable, as well as other settings such as the sound volume.

The small poker-chip style icon to the left of the reels will give players access to the betting options. The game allows you to play up to five coins on each line, with a minimum coin value of £0.02 and a maximum of £2. When five coins are active across all nine lines, this totals £90 as the maximum. The minimum bet is £0.18 with just one coin on each line.

Thunderstruck may be one of the oldest slot games we have here at Mega Casino, but players can still take it for a spin on their mobile devices. The game is supported across multiple platforms and browsers and none of the gameplay experience is lost on smaller screen sizes.

The theoretical return to player for the Thunderstruck slot game is 96%, with the maximum win being 50,000x your coin value. Thor is an incredibly powerful God and he is on hand to provide players with some help as they spin the reels.

Thor appears in the game as the wild symbol. As well as substituting for other symbols in order to make winning combinations, it will also double any wins that it helps to secure.

The Asgardian lamb scatter symbols are the key to accessing the bonus spins in the Thunderstruck slot game. Landing three of these will provide players with 15 spins. All wins during the round are instantly tripled. If players land more scatters during the spins then they can trigger another 15 spins.