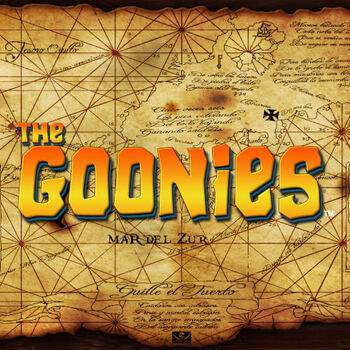 Hey you guys! Check out The Goonies online slot game based on the iconic 1985 film of the same name.

Head out on the quest of a lifetime with your favourite group of misfit kids as you go on the hunt for riches and treasure. Join Chunk, Mikey, Brand and the gang as they go on their hunt for One-Eyed Willy’s long lost treasure.

Along the way, prepare to encounter an incredible range of mini-games and special features as the group goes deeper and deeper into the unknown. The potential riches that await you are well worth the journey though. The Goonies is an online slot developed by the team at Blueprint Gaming. The game has a standard 5 reels and 20 pay lines but this is far from your average online slot game.

The Goonies slot online is bursting with throwbacks to the much-loved 80s classic movie and it is overflowing with a ridiculous amount of special features, mini-games and prizes for players to sink their teeth into. The reels themselves take place on the map that the Goonies themselves use in the movie.

The game also features an upbeat soundtrack that not only keeps you feeling invested in the game’s adventure but also helps bring back memories of hours spent watching the video on VHS and preparing for your own exciting adventures.

How to Play The Goonies Slot Online

Before you adopt the Goonies never say die attitude and head out on your adventure for treasure, you will need to get to grips with all of the game’s special features and bonuses.

The first thing you will need to do though is to select your stake size. Once you have done this, you can grab your map and hit the spin button to see what The Goonies have in store for you.

The game has a classic 5 reel and 20 pay line structure. The symbols on the reels are all inspired by imagery from the movie. The lower paying symbols are A, K, Q and J royals and up from that are the pirate ship, treasure chest, skeleton (One-Eyed Willy), pirate flags and a collection of gold coins. The pirate flag is the highest paying of these symbols. The game’s wild symbol is a medallion and this can replace all other symbols in order to create winning combinations.

The game’s biggest bonus is that it boasts a whopping 12 different special features, all of which were inspired by the movie in some way. The six main features are all accessed at random by getting One-Eyed-Willy’s riches symbol. These bonuses are all character-focused and include things like extra wilds being thrown onto the reels, a free spins round, and several other potential prizes. Keep an eye out for Sloth’s Win Spin feature in particular, with the character swinging across the reels and transforming them into a winning combination.

The other six features that the game has to offer all come as part of the One-Eyed Willy bonus. This feature will also be randomly triggered during the game. You get to spin a reel and see which of the six features you will get. Once again, these features are all character-focused and many of them provide you with free spins or some sort of cash prize bonus.

If you still want more, then The Goonies still has more to give. The game also features two more randomly generated bonuses. One of them will see a scythe appear and reset a losing spin into a winning one at random, and the other will see the cave collapse around the slots and provide you with yet another winning combination.

The Goonies is jam-packed full of features and the good news is that if you want to access the game and all of those features on your mobile phone, then you can. The game has been perfectly optimised to work on mobile devices and functions on both Android and IOS operating systems.

Meet the The Goonies Characters The Goonies is one of the most popular films from the 1980s. The movie was directed by Steven Spielberg and follows a group of six kids as they head out on an adventure to find the long lost treasure of One-Eyed Willy, a local legend in their town.

Several of the main characters from the Goonies film make appearances in the movie, including Mikey Walsh, his older brother Brandon, Data, Mouth and the overweight and incredibly loveable Chunk. Sloth, who is arguably the film’s most iconic and cherished character, also makes an appearance in the game.

Each of the characters is on hand to provide you with a little bonus and to try and help you find the long lost treasure of One-Eyed-Willy.