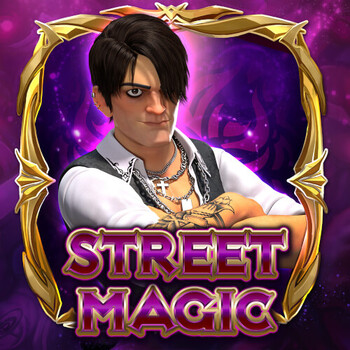 Prepare to be amazed when you play Street Magic! This slick slot is brought to you by the prolific Play’n GO team, so it looks gorgeous from the start. The game opens with a brief animated intro featuring a modern street magician, setting the scene for the magic-themed action that follows. Play’n GO has captured an excitingly mysterious feel in Street Magic, with atmospheric music and stylish visuals with striking symbols. And the street magician who appears in the intro and on key symbols adds personality to the game, too! Keep reading for essential info on Street Magic at Mega Casino!

Street Magic is easy to play, thanks to its simple controls and gameplay. It has five reels, four rows, and 20 paylines.

Just tap the ‘spin’ button to spin the reels and see if you can pick up a cash prize of up to 5,000x your bet! You need to match two or more of the Playing Cards, Ring, or Clock symbols to win a cash prize, or three or more of the other symbols. We recommend that you check the paytable before you try Street Magic for the first time. How? It’s easy — just press the ‘i’ button below the reels!

If you want to change your stake between spins, press the ‘-’ and ‘+’ buttons at the bottom of the screen to scroll through the bets available. Then, click on the stake option that suits you. You can bet between £0.20 and £100.

The Playing Cards and Ring are the top-paying symbols. You can win up to 25x your bet if you land enough of them across the reels.

The Clock symbol pays a maximum of 15x your bet, followed by the Padlock, which is worth up to 6x. The Dagger symbol awards up to 5x your bet, and the Handcuffs pay as much as 4x.

The lowest-paying symbols are the playing card icons: Spade, Heart, Club, and Diamond. You can win up to 1x your bet if you match three, four, or five on a payline.

The Playing Cards are Wild and substitute for all other symbols except the Scatter.

The Magician symbol is the Scatter, and triggers bonus features when it lands on the reels. But it’s also Wild, so it can substitute for all other symbols to help you build winning combinations!

Just land two scattered magicians to trigger one of three randomly selected magic acts. These are:

Land three Magician Scatters to trigger the Free Spins feature and win up to 12 free spins.