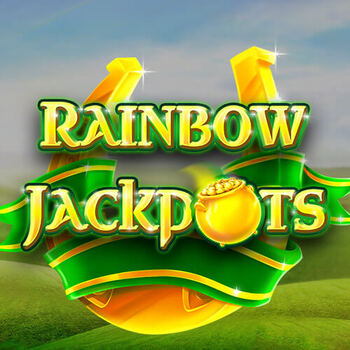 Take a trip to the Emerald Isle in this lively and enjoyable online slot game by the team at Red Tiger Gaming. It’s time to find out if you have the luck of the Irish in Rainbow Jackpots online slot game.

Rainbow Jackpots, developed by Red Tiger Gaming, puts a new twist on a much-loved slots theme. There’s no shortage of Irish themed slots here at Mega Casino and Rainbow Jackpots is one of the best. Join a mischievous leprechaun on his quest for a pot of gold and win some potentially big prizes while also trying out the game’s many great features and mini-games. Rainbow Jackpots online slot game is an Irish themed slot machine by the gang at Red Tiger Gaming. The game is rich with imagery from the famous country, including all of the images on the reel and the borders of the reels itself.

To truly capture that jovial Irish spirit, the game utilises an upbeat Irish soundtrack that perfectly compliments the atmosphere of the rest of the game. The game leans further into the theme as it allows you to test your luck in a series of Irish themed features and mini-games.

The game features all of the classic elements of an online slot, with 20 pay lines providing players with lots of different chances to get their hands on some of the leprechaun’s many prizes.

To get your hands on that illustrious pot of gold at the end of the rainbow, you must first get to grips with how to play Rainbow Jackpots slot online. The basic set-up of the game is easy to follow. The game has 5 reels and 20 fixed pay lines.

The first step you must take is to choose your bet per spin. You can do this by using the plus and minus buttons at the side of the screen. The game has a generous betting range, with the lowest available being £.20 and the maximum being £500.

The Rainbow Jackpots logo also doubles up as the game’s wild symbol and can be substituted for any other symbol in order to create winning combinations in the game.

The symbol swap feature will happen at random and it is when the game’s leprechaun wanders long the bottom of the screen, takes a hit from his pipe and blows smoke over the reels. When the smoke has cleared, a symbol will appear and this will enter the reels in order to give you bonus winning combinations.

The next special feature is the free spins round. This will be triggered when you land three or more golden pots of coins on your symbols. This does exactly as it says on the tin and rewards you with extra free spins. This round can turn into the gift that just keeps on giving and you can win up to 100 free spins during this process.

This wouldn’t be an Irish themed slot game without a beer-themed special feature. This randomly triggered feature sees three pints of beer appear over the reels. Players must then select which of the three pints that they want to take, with each one offering up a different cash prize.

You can also take Rainbow Jackpots out and about with you with the mobile version of the slot. The game has been optimised to work on both Android and IOS devices. At the heart of Rainbow Jackpots slot online is the game’s loveable Leprechaun mascot character. The mischievous little fella will occasionally walk around your reels, offering words of encouragement and providing you with some entertainment.

He will regularly shout out his catchphrases to you whenever you spin the reels and will also join you in celebration if you secure yourself a big prize during the game.

He also carries his magical golden pipe with him which he will use on occasion to bestow you with magical gifts on your quest for your pot of gold.