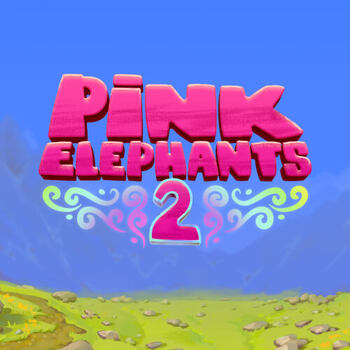 Do you have what it takes to uncover the mystery and open the pink portal? In Pink Elephants 2, players are tasked with finding the golden peanut once again and finding out where all of these whacky Pink Elephants have come from. The slot comes loaded with bonus features and quirky touches to help you in your quest. Pink Elephants 2 is the sequel to Thunderkick’s very successful original title. The quest to enter the pink dimension takes players further afield as they leave behind the desert and savannah of Africa to head north into the giant continent of Asia in search of the ancient portal. The soundtrack helps to cement the Asian setting, immersing players in this mystical land.

The setting is not all that has changed. The minions from the first title have disappeared, and are replaced by a family of mountain goats. The goats, like the minions before them, are in search of the legendary golden peanut, hoping that it will bring all of the answers they need about the pink portal. These goats appear on the reels as symbols. Players will find a younger blue kid, an older teenage buckling who is green, an orange and rather eccentric looking doe, and an old purple billy goat who appears wise with his years. Of course, the titular pink elephant also makes an appearance as one of the higher paying symbols.

The Pink Elephants 2 slot game maintains all of the same gameplay features that made the original title such a runaway hit. The game is played across six reels and four rows, with 4,096 different ways to win.

To get the reels spinning, players will need to first select their stake. This is done by clicking on the casino chip icon in the corner. The minimum amount that can be wagered is £0.10, while the maximum is £100. The game also has an autopsy option. This is adjustable and comes with settings for maximum wins and losses. Players can use this to take up to 5,000 auto spins.

Clicking on the menu button also presents the chance to open up the game’s paytable. The most valuable symbol is the pink elephant this will return 10x your stake for matching five across one of the pay ways. Unlike the other base game symbols, the pink elephant only needs to match twice to generate a win. This does not represent the maximum win however which is 10,000x your stake which can be managed in the bonus rounds. The Pink Elephant 2 RTP is 96.13%.

You can also take this magical trip on your mobile device right here at Mega Casino. Thunderstruck has developed the slot to ensure that players get the same experience on desktops, mobiles and tablets across different platforms and browsers. The Pink Elephants 2 slot game is all about finding the golden peanut symbol and unlocking the magical portal to the pink dimension. The symbols act as the game’s scatter and launch the bonus round.

Three or more of the golden peanut scatter symbols during a single spin unlocks the bonus game. The number of spins depends on the number of triggering scatters. Three scatters return seven spins, four scatters give players 11 spins, five reward 15, and using six scatter symbols gives players 19 bonus spins to start with. When the feature starts, a logo for each member of the goat family, surrounded by empty slots, appears on the left. Players can collect elephant orbs during the bonus round, these orbs fill in the slots around the goats. When all the empty spaces are complete they will transform into a pink elephant as will their symbol anytime it appears on the grid.