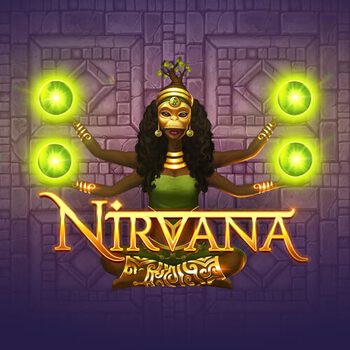 Teen angst, oversized beanies, flannel shirts. If you are expecting to find any of those three things in the Nirvana online slot game, then you are n the wrong place. This is not a slot inspired by the iconic grunge band of the 1990s, but rather, it deals with the mystical state of being that grants players pure freedom from the physical world. This unique and mind-bending slot from Yggdrasil Gaming takes players on a spiritual journey in the hope they will find riches here at Mega Casino. Yggdrasil Gaming, a Swedish company named after the tree of life in Norse mythology, exploded onto the scene in 2013 with its brand of innovative and unique looking games, a category befitting of this online slot game.

The concept of Nirvana is derived from the Indian language meaning to be blown out or extinguished like a candle. The idea of Nirvana as a place is very much a Western idea, and that is how it is depicted in this enchanting online slot game. It is a place filled with strange and unique creatures, and it places players high above the cloud in some sort of otherworldly spiritual land.

The creatures you will find on the reels are all magical in their own special way. There is the gryphon - the part lion, part eagle creature popularized in recent years by Harry Potter, a jackalope which is a rabbit or hare with deer antlers, a basilisk shown here as a large snake with a dragon’s head, and a phoenix, rising from the ashes. All of these are brought to life marvellously thanks to Yggdrasil’s excellent attention to detail.

How to Play Nirvana Slot Online

Being in a state of Nirvana means you are free of all of the world’s trouble. While the Nirvana slot game won’t quite achieve that, you certainly would have any troubles playing the game. It is easy to get started.

At the bottom of the screen, you will find the control panel From the bottom left, there is a display showing there are 20 paylines spread across the 5x3 grid. This is followed by the coin value display. There are +/- signs on either side which you can use to change your bet per line. The minimum bet is £0.20 at £0.01 per payline and the maximum is £100 at £5 per line. Once you are ready, hit the spin button and cross your fingers!

If you want to enter the state of Nirvana on your mobile devices then you can do it right here at Mega Casino. The game is fully adapted to work across different platforms and devices. The game’s RTP is 96.2%, while the maximum win available here is 800x the overall stake. The slot is considered to be of medium-high volatility. There are three beautiful goddesses to help players out in the Nirvana slot bonus features. Each of them holds its own special power to help you along the way.

The Nirvana bonus spins are set off when players land three or more of the game’s lotus scatter symbol. Landing two will also grant you one bonus spin. At the start of the bonus spins round, players will get to choose from one of the three following features:

During the bonus spins, two to four additional wilds will be added to the reels in random positions.

The three middle reels will spin together and their display will be identical throughout bonus spins.

After the reels have completed spinning, one reel will automatically nudge up or down to provide players with the best possible outcome available. This will not occur if players already land on the best outcome.

Three or more bonus symbols appearing during a feature allow you to choose another feature to combine it with. This can also happen a third time allowing you to play bonus spins with all bonus features activated.