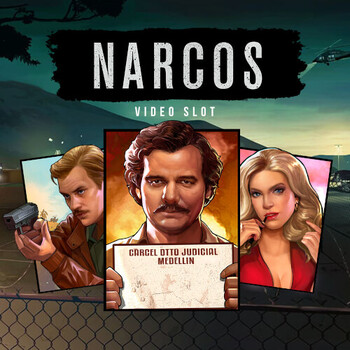 Chances are you’ve heard of the infamous drug lord Pablo Escobar, and you’ve probably also heard of the hit TV show documenting his life, Narcos. Well, now it’s time to reimagine Escobar once again, this time in the Narcos slot game that is inspired by the hugely popular TV show of the same name. Revisit the show’s most popular moments and reacquaint yourself with its characters when you spin the Narcos slot here at Mega Casino. The Narcos slot game is inspired by the Netflix TV show of the same based on the story of Pablo Escobar, a famous drug baron who accumulated a wealth of an estimated $30 billion at the time of his death in 1993. Narcos comes from big-hitters NetEnt, a company that has developed some of the most popular online slot games of all time. Players can find a range of its top slots here at Mega Casino.

The reels are set to the backdrop of a dusty Colombian street, with almost cartoonish depictions of the show’s main characters. On the reels, players will find versions of Joanna Christie as Connie Murphy, Pedro Pascal and Boyd Holbrook as DEA agents Javier Peña and Steve Murphy and of course Wagner Moura as Pablo Escobar himself.

How to Play Narcos Slot Online

Don’t worry if you’re not a fan of the Narcos TV show, it won’t take any pre-existing knowledge of the source material to get to grips with the Narcos slot game. The action all unfolds across 5 reels and three rows. The game offers 243 different ways for players to score a win.

To land a win in the slot, players will need to land matching symbols across different reels on the slots. The position of the symbols doesn’t matter as long as the reels are adjacent and start on the left most-reel.

Players need to choose their bet size and level before they can start. The minimum bet in the game is £0.20 and the maximum is £400. Players can click the MAX BET button to save clicking through all of the different denominations. Hit the spin button, which is styled like a gun barrel, when you are ready to go. There is an autospin option if you want to kick back and maybe even watch an episode of Narcos while the reels spin.

The RTP of the Narcos slot game is listed as 96.23%. The maximum amount that a player can win in the slot is 400x their overall stake. Pablo Escobar gained some unique skills over the years that helped him to evade capture. He has shared just a few of them with you in the Narcos bonus features.

When three or more locked up symbols, depicting Escobar with a sign saying catch me, appear on the same row they lock in place and return three bonus spins. During these bonus spins, only the Escobar and golden briefcase symbols are active. The cases open to reveal prizes including, cash rewards, bonus spins and win multipliers.

There is a scatter symbol depicting a dusty rusty car. Three or more of these anywhere on the reels return 10 bonus spins. During this feature, symbols can randomly turn into a wild. This turns them into walking wilds, if they still remain when the spins run out then additional spins are awarded until the wilds disappear.

During any base game spin, the drive-by feature could activate whereby bullets fire onto the reels and turn some symbols into wilds.

Any wins generated using wild symbols cause the wilds to catch fire and remain on the reels for the following spins. They walk one space to the left after each spin until they have left the reels. It is possible to have multiple walking wilds on the reels at the same time.