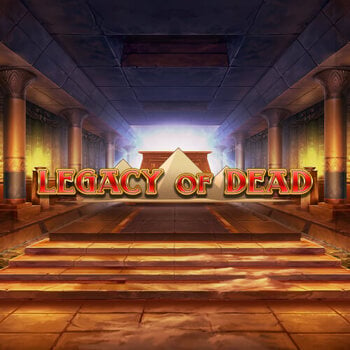 Step back in time and revisit Ancient Egypt in Play’n GO’s thrilling Legacy of Dead online slot game. The makers of the iconic slot game, Book of Dead, are back with an even more exciting game.

An Egyptian King has been released from the book of the dead and is trying to reclaim his gold. Can you step up and get your hands on it before he does? Legacy of Dead slot online provides players with plenty of opportunities to beat the king and win some big prizes thanks to some great gameplay options and an array of special features. Legacy of Dead transports players back into the world of Ancient Egypt and gives them the chance to get their hands on some of the many treasures that this world has to offer. The game is made up of five reels and ten pay lines, with a handful of special features being available to help players in their quest for gold.

The game is a follow-up to Play n’Go’s popular Book of Dead online slot game. The book itself is no longer around, instead, players must now deal with the aftermath of the book being opened and the king’s spirit escaping.

The slot is set in right in the heart of a lavish Egyptian tomb. The reels are bordered with gold and the room is lit by Egyptian oil-lamps and the game is accompanied by a simple but effective soundtrack that really immerses you in this world. The graphics on display once again show why Play’n GO are one of the most game developers around.

How to Play Legacy of Dead Slot Online

Playing Legacy of Dead online slot is very simple. To get started, players will need to select the coin value and the number of coins they are wagering using the +/- buttons which are located directly under the reels. Once this has been done, you can hit spin and see what the game has in store for you.

The reels of the game are adorned with Ancient Egyptian imagery. On the reels, players will find Horus, an Anubis, Tutankhamen, and the standard 10-A symbols written in an Ancient Egyptian style. Players can check the value of these symbols using the game’s paytable at any point during play.

The most notable feature players will encounter when playing Legacy of Dead is the game’s double or nothing option. Whenever players manage to secure a win, the game will offer the chance to double or even quadruple your prize. Whenever a win is secured, players will be presented with a golden playing card lying face down. If you can correctly guess the suit of that card, then your money will be doubled. If you are wrong, however, then you will lose your original winnings.

Legacy of Dead also features a great free spins round. Players can trigger this by landing three or more of the game’s wild symbol across their reels. This is not just a free spins round though, the game also chooses a random symbol to expand over the reels as well. Players are rewarded with 10 free spins and if they’re lucky enough to land more wilds during this round, then they can retrigger the free spins, giving themselves more opportunities to land a big prize.

Meet the Legacy of Dead Characters Legacy of Dead online slot brings the gods of Ancient Egypt back to life in a new and exciting way. There are several characters you will meet in the game, all of which help the player out in one way or another. Anubis, the God of the dead makes an appearance on the reels. He is notable because he has the head of a jackal. The other two gods who make an appearance here are Osiris and Horus, the God of the afterlife and the God of the sky respectively.