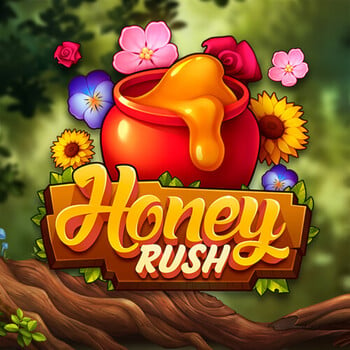 Join a group of little worker bees as you spin the reels and become a part of the hive in the Honey Rush online slot game. This sweet slot game comes from the creative minds at Play’N Go, providing players with a range of fun bonuses, some innovative design features, and much more. You can buzz around and spin the slot on both mobile and desktop here at Mega Casino.

Becoming part of the colony in the Honey Rush slot is not as tricky as it sounds. The slot boasts an intuitive interface that is easy for players to get up to speed with. The game has a fascinating design that is unlike anything else you will find here at Mega Casino. The fun unfolds across seven reels with a 4, 5, 6, 7, 6, 5, 4 formation. This sticks with the slot’s theme and is designed to look like a honeycomb.

There is nothing else about this slot that is traditional either. Instead of using a standard payline system, the slot adopts a cluster-pay mechanic. For this, players will need to land five or more symbols next to one another in order to form a winning cluster. Winning clusters will then disappear and be replaced on the reels by more symbols. This happens until there are no winning clusters left on the grid.

This unique design also makes a smooth transition onto mobile devices, with players being able to use their phones and tablets to play the Honey Rush slot at Mega Casino. The game can be played from £0.20 up to £100. It has an RTP of 96.50% and has a maximum win of 9,000x the overall stake.

Bees are essential to our survival on this planet, and the useful little creatures also supply players with a load of bonus features for this game.

Every time players land a win in the Honey Rush game, the symbols are collected in a meter. This meter will reset to zero after each cascade is finished. There are four levels for the meter. The first is triggered at 20 symbols, the second at 40, the third at 80, and the fourth at 160. Each of the first three levels triggers the Colony feature and adds a sticky wild to the grid, while the fourth triggers the Queen Colony feature.