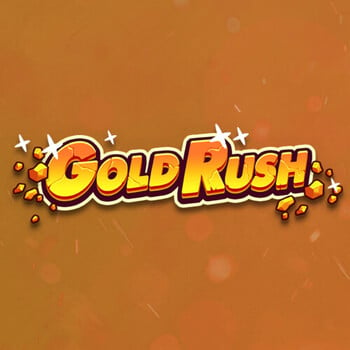 Get your pickaxe and start tunnelling into those mines as we go hunting for gold in Gold Rush Slot. The game takes you right into the thick of the American Gold Rush as you spin those reels and attempt to strike lucky.

Pragmatic Play has done an incredible job of bringing the mines to life. The game is also full of great features and mini-games, presenting players with plenty of opportunities to get their hands on some of this hidden American gold. So what are you waiting for? Get your helmets ready and start digging for that gold right away. Gold Rush Slot was developed by the team at Pragmatic Play. The game features 5 reels and 25 pay lines. The game is set deep in a Californian gold mine with the wooden borders of the reels resembling an old rail-road track.

Gold Rush Slot boasts slick and modern visuals, and the game is also accompanied by an upbeat soundtrack that really keeps your spirits up as you get spinning for more gold. This all combines to create a perfect atmosphere and bring to life the excitement of the original American Gold Rush.

If you want to play more Gold Rush but fancy a different kind of mining experience, Pragmatic Play has also launched a Gold Rush scratchcard called Gold Rush 250,000 that allows players the opportunity to win a staggering 250,000 times your stake in the game.

Gold Rush Online Slot has a fairly straightforward set-up. Like all Pragmatic Play titles, the game is easy to play for both newcomers and experienced players alike. Once you have loaded the game up, you will need to select your coin value and wager. You can also adjust several of the game’s settings from the opening menu.

The main wager is ten coins per line with a value range from 0.01 to 0.50. The broad range of betting options means the game is fun to play no matter what your budget. Once you’ve selected your wager, you can hit the spin button and see if you can strike gold. There is also an auto-spin option available if you want to put your feet up and let the game do the hard work for you.

The game’s wild symbol is the sticks of dynamite. These will explode across the reels and substitute for other symbols in order to score winning combinations.

The game’s scatter symbol is the tunnel and this will trigger the game’s most exciting bonus feature. Once you score three or more of these, you will drop down to the next level of the mine and start a different variation of the game. In this version, you will be granted 10 free spins and there will be seven extra prospector symbols on the reels.

There will also be a range of glistening golden nuggets added to the reels at this point. These nuggets are worth points, and once you collect a certain number of them, more prospector symbols will be added to your reels and you will be given more free spins. This feature can build up quite nicely and can present you with the possibility to win some serious cash. There are a total of four different levels available during this feature.

You can also get very lucky and strike gold with this game by winning the top jackpot prize of 2,500x your original stake.

Gold Rush Online slot game has also been optimised to work on both mobile devices and is supported on popular browsers like Google Chrome and Safari. Helping you in your quest for gold in Gold Rush Slot is an experienced old prospector. He greets you as you load the game up and is one of the main characters on the reel of the game throughout. He is carrying his trusty pickaxe over his shoulder and is showing off a gold nugget that he has found during his mining.

Accompanying the prospector down into the mines is his trusty old pack mule, who brings all the supplies that he needs to make sure he strikes gold.