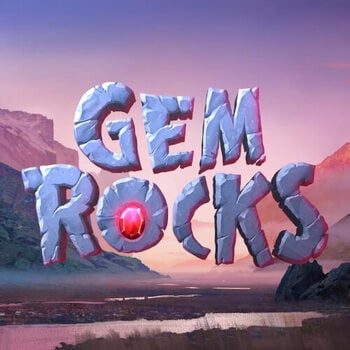 Are you looking for something unique? Tired of spinning the same reels over and over? Then the Gem Rocks slot developed by Yggdrasil Gaming could be exactly what you’ve been looking for. This exciting slot game takes you on a trip to the moon, where players must mine for gems and try to get their hands on some wins. You are not alone though, as you can employ the help of rugged rock monsters to unlock bonuses and exciting features. Gem Rocks was designed and developed by Yggdrasil. There are few developers in the industry who can deliver a slot as unique and exciting as the ones that Yggdrasil offers. We have a range of top Yggdrasil slots available here at Mega Casino.

The Gem Rock slot game takes players away to a mystical moon. The slots are set amongst the heights of a cosmic mountain range with the sky lighting up in the pinky-orange hues of sunset. All this while an epic soundtrack hums away in the background. On the mountainous rocks, players will uncover the gemstones which serve as the game’s symbols. They come in different shapes and colours; the orange, purple, green and grey gems are among the more common symbols. The blue and turquoise are of a higher equal value, the yellow moon offers slightly more, but the most valuable of all these gems is the gilded red star.

As well as a unique design, Gem Rocks also takes place on a slightly larger grid than most top online slots. The title is set across six reels, each of which contains four rows. There are 4,096 different ways that players can secure a win in the game.

Gem Rocks also embraces a cascading symbols feature. Whenever players land a winning combination, new gemstones crash down from up high like falling rocks. These falling symbols may also generate a winning combination and symbols will continue to fall until no more wins are made. When a matching line is about to happen from cascading the gemstones will give off a warm glow.

There is access to the rules of the game, a paytable and a pop-up help guide in the menu which can be accessed by pressing the purple plus icon in the bottom left-hand corner. Here you can also find visual and audio settings along with autoplay settings. An infinite amount of auto-spins can be employed by pressing the spin button with a play icon. Players can adjust their bet settings at the bottom of the screen, with a minimum wager of £0.10 and a maximum of £50.

The game has an RTP of 96.20% and it is low when it comes to volatility. The highest win that can be secured in the game is 9,217x your stake. The title is accessible across a range of different devices, with the quirky design looking great on mobile screens. Floating out in space can be incredibly lonely, but don’t worry, the rock monsters in the Gem Rocks slot are on hand to keep you company.