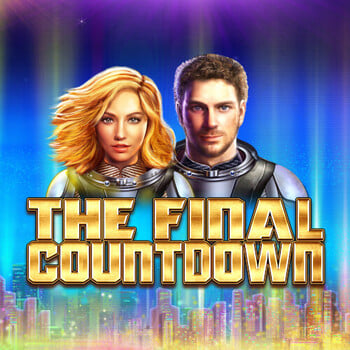 It’s the Final Countdown! BA DA BA BA! Let’s be honest, we’ve all screamed the lyrics to Europe’s The Final Countdown at the top of our lungs at a late hour at some point in our lives. The song is one of the eighties' most iconic pop tunes, and it has now been immortalised on the reels in The Final Countdown online slot game from Big Time Gaming. So get your glad rags out and prepare for a dose of 1980s disco nostalgia here at Mega Casino.

One reason for the enduring popularity of the original Final Countdown song is the simplicity of its lyrics and its beat. This is recaptured with the base game of The Final Countdown slot game. The game has six reels and four rows. This slightly larger grid set-up allows for a whopping 4,096 different ways to win.

To set your stake for your spin, use the two green arrows above the stake option on the right-hand side of the screen. The minimum bet that can be placed is £0.20, while the maximum is £20. You can also enjoy The Final Countdown mobile slot game on a range of devices right here at Mega Casino. The mobile version of the slot is just as user-friendly and it boasts top of the range mobile graphics and visuals.

The slot hits with some really good winning potential as well. In the bonus rounds, players can land a maximum win of up to 888x their overall stake. The slot has an RTP of 96.56% when using the Venus Bonus Spins and a high of 96.65% when using the Countdown Bonus Spins.

Get ready to rock out with The Final Countdown bonus features selection. Big Time Gaming has made sure that players get the best possible gameplay experience with not one, but two innovative bonus spins features.

At any point during the base game, random reels can be cloned. This can produce between two and four cloned reels. This helps boost your chances of securing a winning combination.

The FC logo is the slot’s scatter symbol and landing three of them will launch the bonus spins round. Players will then get to choose between the following two bonus spins features.

During this round, players must trigger an actual countdown and get it to zero. Whenever you land a Final Countdown scatter during the round, it can reduce the countdown to three. When you get it to zero, the round retriggers. There is also a wild symbol with a multiplier attached during the round that increases every time you retrigger the bonus. This can go all the way up to 256x.

For this round, players are given 15 spins with a guaranteed reel clone on each spin. The round retriggers if players land three or more scatters in a single spin. There is another multiplier in this round that can grow all the way up to 888x - the game’s maximum win.