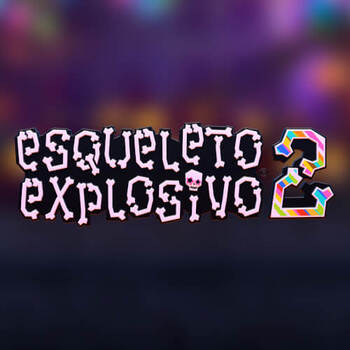 From the first reel onwards, winning combinations are formed by 3-5 symbols meeting diagonally or horizontally on adjacent reels. The 15 skulls in Esqueleto Explosivo Game resemble a regular five-reel slot with 17 win lines. Unlike most other slots, where you pay per win line, you'll pay a total bet for each spin in this one. If you get three or more of each symbol on a pay line, you'll win. Everything seemed to be standard.

Two things will happen if you get a win. To begin, the skulls in the winning line will begin singing. Then they'll blow up. The skulls above will fall into position after the explosion, and more skulls will flow in from above to fill any gaps. This might result in more victories right away, with the multiplier increasing by a factor of two with each succeeding win. This means that if you have six wins in a row at this point, the multiplier will increase to a whopping 32x.

The pink skull is the highest paying symbol in the game, paying 2.5 times your total spin amount. The green skull pays 1.4 times your entire wager, while the blue, orange, and turquoise skulls pay 1.2x, 0.9x, and 0.7x, respectively. These win values may appear little at first glance, but when you consider that a single spin can result in numerous wins, each of which is multiplied by a bigger multiplier, the pay-outs become clear.

The Dropping Symbols game mechanic is a cascading wins technique that produces chains of winners by exploding winning symbols from the reels to allow new ones in. The Mucho Multiplier begins at x1 and doubles with each victory on a symbol drop in the following order: x1, x2, x4, x8, x16, with x32 being the maximum during the base game.

When the Explosivo Wild arrives, the Mucho Multiplier likewise increases. The wild symbol appears on reels 2, 3, and 4 and replaces all other symbols save the scatter. In addition, it bursts and destroys 3–8 symbols in its immediate vicinity. Scatters and the high-paying symbol are the only exceptions.

Fans will be happy to see the addition of a Free Spins round that was sadly absent from the original. The scatter is the purple wind up skull icon. During the base game, landing 3, 4, or 5 symbols awards 10, 12, or 14 free spins, accordingly. Scatters continue to occur during free spins and 2, 3, 4, and 5 offers an additional 3, 7, 10, and 12 free spins. In addition, every extra scatter above 5 adds two more free spins to the total.