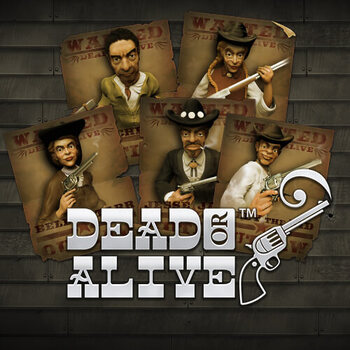 Attention all gunslingers - get your pistols at the ready because it’s time to head out West with the Dead or Alive online slot game from NetEnt. Players are tasked to take down a deadly gang of outlaws, all while spinning the reels, triggering bonuses, and trying to catch some potentially big wins. If you think you’ve got what it takes to claim one of these bounties, then draw your pistol and spin the reels here at Mega Casino. The old American West was known for being one thing - wild! The Wild West has been brought back to life in this well-crafted online slot game from the team at NetEnt. In the game, players must spin the reels to try and score themselves some bounty money, while a big lightning storm brews in the background. Two oil rigs are also hard at work here, with NetEnt really making you feel as though you have travelled back to the early 20th century.

Make sure you keep your eyes peeled for the sneaky gang of outlaws that are on the run in the Dead or Alive game. These all make appearances in the reels on their wanted posters, acting as the game’s wild symbols. You will also find a pistol, a sheriff's badge, a shot of whiskey and some cowboy boots on the reels too. Every movement in the game is accompanied by the sharp sound of a gun being drawn, adding to the excitement of the slot.

How to Play Dead or Alive Slot Online

Getting into a shootout with a wanted outlaw is a pretty terrifying situation. Playing the Dead or Alive slot, however, is far from terrifying. The game has easy to use controls and has a user-friendly interface that makes spinning the reels a breeze.

The game’s action takes place on a grid made up of five reels and three rows. There are nine active paylines available on each spin. If you want to find out where these are, as well as the value for all of the symbols in the slot, you can check out the game’s paytable at any time.

Players will need to choose their coin value and the bet level they want to have active before heading into a shootout. The highest bet a player can place is £18, while the lowest available is £0.09. There is an autoplay option if you want to sit back and enjoy the action. This allows the game to take up to 1,000 spins on the player’s behalf.

During the Dead or Alive bonus spins, players can secure a win worth up to 54,000x the value of their coin bet, which comes to 6,000x their total. The RTP for the slot is 96.82% and is highly volatile.

The Dead or Alive slot at Mega Casino is compatible with a range of different devices. If you fancy heading into the Wild West while you are just scrolling through your phone, then you can do. NetEnt has fully optimised the game to make sure it runs smoothly on the Mega Casino mobile site. You will not want to try and tackle this dangerous group of outlaws alone. The Dead or Alive slot comes with useful bonus features to help you out.

To earn some bonus spins, players will need to land three or more of the scatter symbols in the game. Doing this will then reward players with 12 spins. Every time you land a win in the bonus spins round, you will get a 2x multiplier attached. During the round, any wild symbols that land on the reel will become sticky and will stay active on the reels until the end of the game.