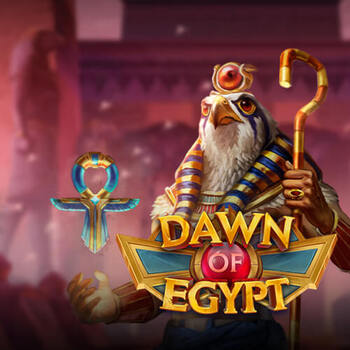 Get ready to revisit Ancient Egypt with Play’n Go’s exciting slot game, Dawn of Egypt. In this hugely anticipated follow up to Play’n Go’s huge hit, Legacy of Egypt, players are given even more ways of getting their hands on potential winnings.

The game features brilliant graphics, an immersive soundtrack and some simple but effective gameplay mechanics, as well as some fantastic bonus features and free spins rounds. WIth so much on offer, what are you waiting for? Head back in time to Ancient Egypt and hit that spin button right now to find out what the Gods of Ancient Egypt have in store for you. Dawn of Egypt whisks players away deep into the Ancient Egyptian times. The game is a sequel to Play’n Go’s Legacy of Egypt and is one of many titles by the company based in this time period including Book of Dead and Legacy of Dead.

The game is set outside a giant pyramid, with the reels being bordered in bold. The symbols on the reels are all inspired by Ancient Egyptian culture and include the Gods Horus and Bastet, as well as a scarab beetle, some Egyptian jewelry, and the standard poker symbols 10-A written in a hieroglyphic pattern. The game’s soundtrack also does its best to transport you back into this time period, and the sound effects help keep you in the mood as you chase the potentially big wins that the game has on offer.

How to Play Dawn of Egypt Slot Online

Ancient Egypt is a magical and mysterious time period, but there is nothing mysterious about how to play Dawn of Egypt online slot. The gameplay is incredibly simple and getting started couldn’t be easier.

To start the game, players need to select their stake size using the +/- buttons that are located underneath the slot’s reels. Once this has been done, it’s time to hit the spin button and see what the Gods of Ancient Egypt have in store.

The game has an RTP of 96.23% and offers players a ton of ways to get their hands on some big wins. Players can check the value of the game’s symbols at any point using the slot’s paytable.

Play’n Go offer players the chance to get their hands on some huge winnings during Dawn of Egypt’s free spins round. The game offers players a free spins round, but this is not just a standard free spins bonus. The round is triggered when players manage to land three or more of the game’s scatter symbols on their reels.

Once this has been triggered, the game will then allow players to spin a wheel to determine how many free spins they will receive, with the maximum being 20. On each of the free spins, a high paying symbol will be selected at random and will replace all of the lower paying symbols on the reels. During this round, the game’s scatter symbol will also become a wild symbol, substituting for all other symbols in order to land winning combinations.

The fun doesn’t stop there though. If a player is lucky enough to land two or more wild scatters, they will then trigger the pyramid spins round. During the pyramid spins round, the chosen high pay symbol is retained for each spin, providing players with plenty of opportunities to score some pretty big winning combinations.

Meet the Dawn of Egypt Characters

This wouldn’t be a game about Ancient Egypt if it didn’t have some of the Egyptian gods making an appearance. There are two main gods who make an appearance in this game. Horus, the falcon god, and Bastet, who has the head of a cat.