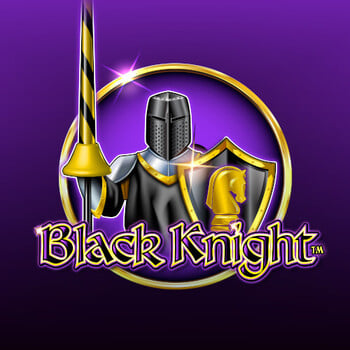 Get ready to take a trip back to the times of the legendary King Arthur in the Black Knight online slot game from WMS. The ominous knight lurks around the reels, but he is not looking to reign down death and destruction, instead, he wants to help players score some potential wins with an array of bonus features. The game brings the legendary Black Knight to life in a way players have never seen before, providing one of the most exciting online slot experiences here at Mega Casino. WMS takes players back to Medieval times in the Black Knight slot game. The title is based around the Arthurian legend - The Black Knight. The legendary knight has been depicted in many different ways over the years - most commonly in association with death and doom. WMS is hoping to change that image a little bit!

The character stands on the right-hand side of the game’s reels, while a coat of arms flies on a banner on the left. The backdrop is a beautiful landscape, with a castle watching over the game from high up on a hill, and a glowing sun setting over the hills. This gives the whole game a mystical atmosphere that helps takes players back to the times of King Arthur and his knights.

The Black Knight may be a symbol of dread and doom in Arthurian tales, but he is far from that in this hugely enjoyable online slot game. In fact, the Black Knight himself is hugely helpful, acting as the slot’s wild symbol and substituting for others in order to help form winning combos.

To get the Black Knight and all of the other symbols rolling around the reels, you are going to first need to select your stake. This is done easily enough using the control panel at the bottom of the screen. The lowest you can wager in the game is £0.10, while the maximum is £500. You will be spinning five reels, each with three rows each. The game has 30 paylines that are active on every single spin.

The theoretical return to player for the Black Knight slot is 96%, and the maximum that can be won is 500x the player’s stake. This jackpot is won by landing five of the Black Knight symbols on the slot’s reels on one spin. The Black Knight himself may be unforgiving and show no mercy, but the Black Knight slot game comes packed with some great bonus features that can help improve the gameplay and provide players with more winning possibilities.

The Black Knight bonus spins round is triggered whenever players manage to land three or more of the bonus symbol. In this case, the bonus symbol is represented by the black and purple coat of arms. Landing three of these will reward players with seven spins, while four of them will give out 12.

During the bonus spins round, any time the Black Knight wild symbol makes an appearance, it will expand to fill the reels.

As well as the Black Knight bonus spins, there is also the big bet option. Players can launch this at any time by clicking on the Big Bet button on the control panel. This will trigger five spins at twice the bet of a standard spin. Any wilds that land during these five spins will stick to the reels for the duration of the spins.