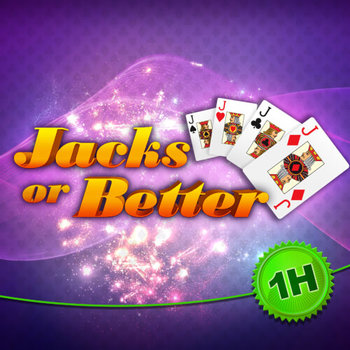 Playtech's Jacks Or Better is a twist on the classic video poker game. Over the course of two deals, the purpose of the game is to construct a winning poker hand. With five coins in play, the biggest win is 5,000 for a royal flush. The prize is worth 20,000 at a maximum wager of 5. Players who wager 1 on each hand will receive a total of 250. Despite the fact that this game has no bonus features and is rather basic in that regard, it has a staggering RTP of 99.54 percent.

How to Play Jacks Or Better Slot Online

The default bet amount is one, but you may choose from 0.05 to 5, and you can play up to five coins per line, for a total gamble of 25. For individuals who desire to play for 25, the Bet Max button offers a convenience. Players should be aware that the pay table does not scale evenly, and the royal flush level in the five-coin column has a large advantage. As you may expect, the symbols in this game are playing cards ranging from 2 to Ace. As you can probably guess from the game's title, you'll need to land Jacks or higher to win.

To win at the Jacks Or Better Slots game, you must have a specific poker win containing jacks or higher cards. The most crucial thing to remember is that winning sequences are completely based on Poker hands. As a result, if you get a Royal Flush on an active payline, you'll get an x4,000 multiplier on your stake. A Straight Flush, on the other hand, will pay out x200, while a Four of a Kind would pay out x125 of your investment. A Full House will increase your prize by 45 times, while Flush and Straight hands will increase your prize by 30 and 20 times, respectively. The better your hand, the more likely you are to win. When you hit a winning combination, the online slot will highlight each winning payline and display the amount you won during that round and added as winnings.

Even though Jacks Or Better doesn't have any bonus feature, however, this should not deter you because the base game provides plenty winning opportunities and landing a Royal Flush will reward you with a large jackpot of x4,000 times your bet stake. This slot also has a Gamble feature. On a winning hand, all Playtech video poker machines contain a Gamble feature. The player might choose to risk all or half of his or her current winnings by going double or nothing. In addition, if the player's double attempt is successful, he or she can try again and again until the house limit is reached. The house limit is normally 2,000, however it varies with every casino. Choosing one of four cards in the hopes of earning a better value than the one revealed card is all it takes to see if a double was successful. Another thing to keep in mind is that there are no jackpots in this online slot machine game but still compensates with the prizes offered.