It’s time to head out onto the open waters to do battle alongside a bunch of angry Vikings. The Vikings Go Berzerk slot game from Yggdrasil challenges players to rile up a group of already frustrated Vikings in order to see what cash prizes they could possibly have in store for you. The slot capitalises on this theme to offer a selection of great bonuses and other features. Let’s take a more detailed look at the title in this Vikings Go Berzerk slot review and find out what other surprises it has in store.

If there’s one thing you can always trust Yggdrasil to deliver, it’s an incredibly well-designed online slot game. Vikings Go Berzerk is a fantastic example of this. The slot uses its theme well, with the Vikings' longboat being used as a vehicle to carry the slot’s five reels and four rows grid. The stormy waters beneath the boat help to further immerse you in this exciting, if not slightly terrifying world.

The titular Vikings make appearances during the game as symbols on the reels. You will also spot the main Viking characters located at the bottom of the screen. This is for a bonus feature that we will cover elsewhere in this Vikings Go Berzerk review.

How To Play Vikings Go Berzerk 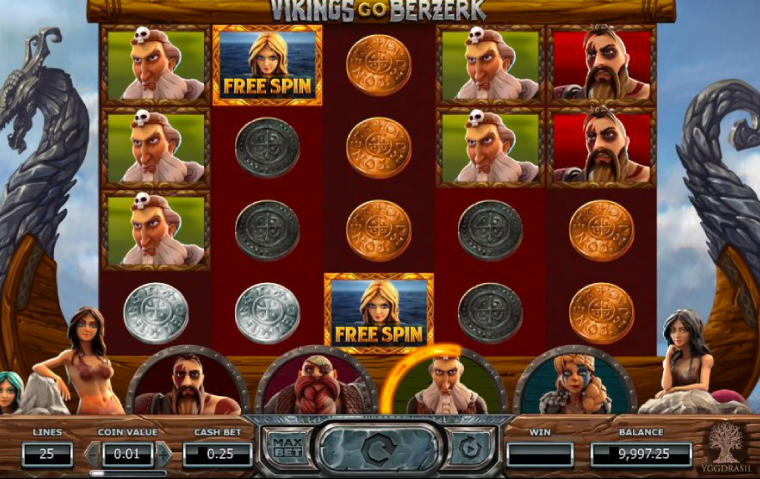 The waters may be treacherous and the Vikings may be violent, but the gameplay here is incredibly calm and easy. Players can win in the slot across 25 fixed paylines that are active on every spin.

The betting range here is very healthy. The minimum coin value in the slot is £0.004, which comes to £0.10 on each spin, while the maximum is £5, which totals £125. This should mean the game appeals to both higher-rollers and more conservative players.

The winning potential here is strong. The game has a maximum payout of 4,000x the overall stake, while the RTP for the slot is 96.1%. The volatility for the game is considered to be in the medium-high range. 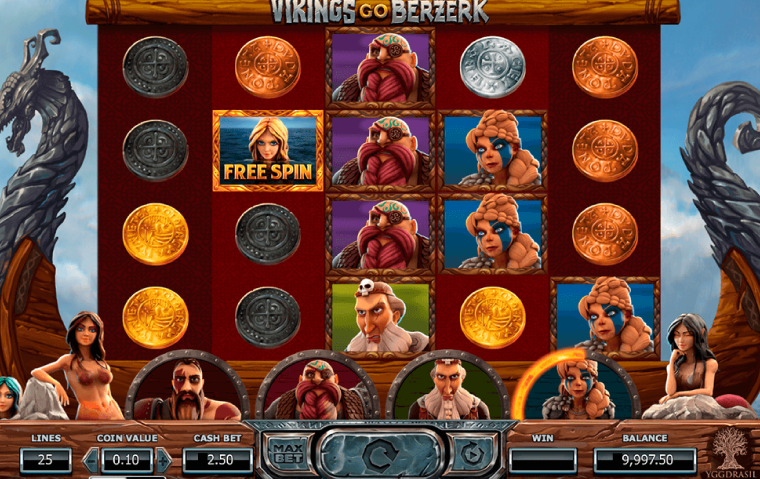 The titular Vikings in this slot are pretty angry. It doesn’t take much to set them off, but luckily for you, the angrier they get, the more Vikings Go Berzerk bonus features become active.

The Rage mode is triggered when you manage to fill one of the Viking symbol meters att the bottom of the reels. When this happens, players get seven bonus spins and the Viking that triggered the round goes into Berzerk mode.

When one of the Vikings enters Berzerk mode, they will enter into battle with the Sirens and will win. This then provides players with a payout.

The bonus spins round is launched when players land three or more of the bonus spins symbols. Three rewards seven spins, four give out 14, and five give 21. During the bonus spins, additional bonuses such as Berzerk mode can also be triggered.

The slot has two treasure chest symbols - a standard one, and a golden one. Whenever either of them lands, you will get a chance to open the box and see what prizes are inside. The golden chest will have better prizes than the standard one.

Vikings Go Berzerk is a great example of what Yggdrasil is capable of delivering. The gameplay is hugely engaging, the design is fantastic, and the bonus features can be incredibly lucrative. The title was so popular that it inspired a sequel, and it’s easy to see why. This is a battle well worth entering over at Mega Casino.