Tomb Raider is one of the most popular video game franchises of all time, so it was only going to be a matter of time before the game was adapted for a slot. The slot was developed by the team at Microgaming and was done during the peak of Tomb Raider’s popularity. Does the slot live up to the reputation of the franchise and deliver a fitting outing for Lara Croft? Let’s look in this Tomb Raider slot review and find out.

While the Tomb Raider slot game may be a little dated, there is no denying that it still provides a healthy blast of nostalgia. The design of the game is fairly simple, with very little in the way of graphics or animations. Eagle-eyed Tom Raider enthusiasts will recognise the various different images of Lara Croft each coming from a different video-game outing.

The RTP of the game is listed as 95.23%, with the slot paying out a maximum win of 7,500x the player’s line bet. These aren’t the most inspiring of numbers but the game does make up for this with some good bonuses.

How To Play Tomb Raider 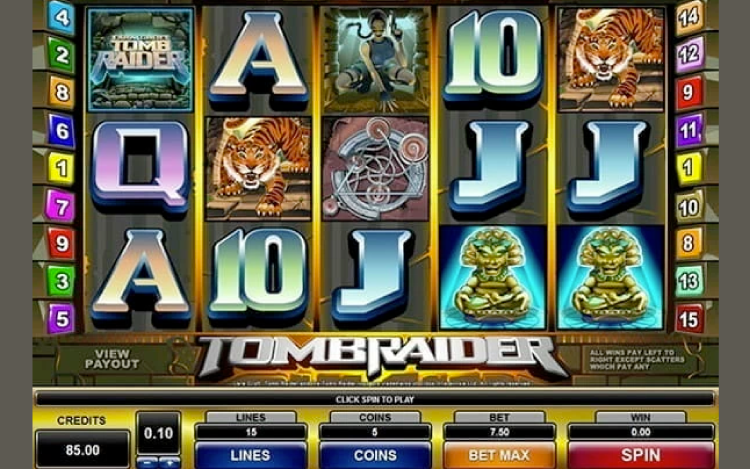 The set-up of the Tomb Raider slot is not all that complicated. The action takes place on five reels and three rows, with 30 active paylines on every spin. You can try and land a win on those lines from as little as £0.30, with a maximum bet of £60 being allowed. This works out as £0.01 and £2 per line respectively.

Lara Croft has been played on many different devices over the years so it’s fitting that the Tomb Raider slot can be played on both desktop and mobile platforms. It is supported across various operating systems as well as most web and mobile browsers. 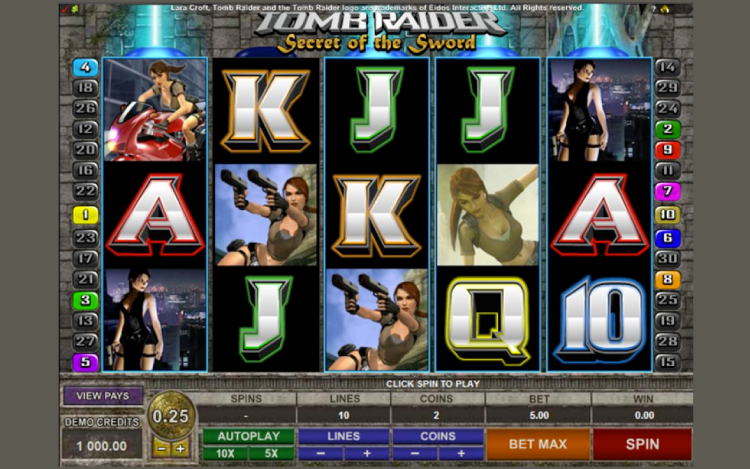 Lara Croft has always had a few handy tricks up her sleeve and that is the case with Tomb Raider bonus features. The following can all be accessed in the game to enhance your experience and boost your chances of scoring a win.

The free spins here are triggered in the traditional way, with players needing to land three or more scatters to set them in motion. What’s more - a cascade style feature is also added into the mix that sees winning combinations replaced with more symbols.

These aren’t the only bonus spins available. Super Mode can randomly trigger during the base game. When this happens, players get five bonus spins and sticky wilds are added to the reels.

It wouldn’t be a Tomb Raider slot game without an adventure of some kind. When you land five of the passport symbols, you will enter a mini pick-me trail style game where you advance along and get bonuses like multipliers and cash prizes. There is also a game within the game - which is another pick-me game called the Shootout.

Lara Croft’s legacy is done a lot of justice in this fun, bonus-packed online slot game from Microgaming. While the slot’s visuals may not be the sharpest, this doesn’t really matter when you’re landing exciting bonus features. The Super Mode was a highlight, because, let’s be honest, who doesn’t love just receiving a random bonus without having to land any triggering symbols? There is a lot to like here, and fans of the Tomb Raider franchise are going to love it.