Since the birth of the Marvel Cinematic Universe, the Asgardian God Thor has found himself to be more popular than ever. This is not something that has gone amiss with slot developers either. The Thor’s Lightning slot game from Red Tiger may be one of the most original and exciting titles to use the character yet. The game uses the character’s mythology

Red Tiger has done a fantastic job of bringing Thor to life in the Thor’s Lightning slot game. The version of Thor we encounter here is much more in line with the one from Norse Mythology. Gone is the Australian accent and long flowing blonde locks, and in their place is a giant red beard and a much more Viking-like portrayal of the Demi-God.

A frost and snow-covered backdrop give the slot a mystical feel. Ancient symbols are carved into the stones, while flashes of lightning and Thor’s Hammer are also visible. The reels themselves are very imposing, taking up a 7x7 space in the middle of the screen. A rallying soundtrack helps to get players in the mood to enter Asgard and see what Thor has on offer.

How To Play Thor's Lightning 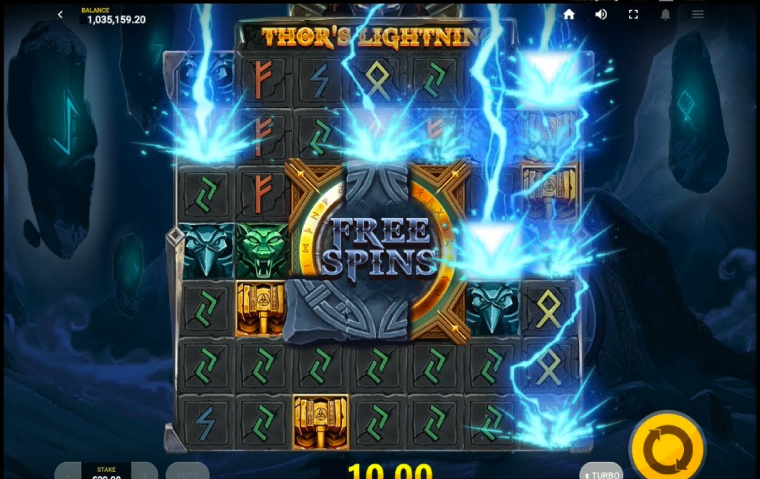 As we’ve mentioned already in this Thor’s Lightning review, the game takes place on a larger than average 7x7 grid. Not all symbols are available though, with the game having a 3x3 grid blocked off in the middle of the reel-set that is used to launch the bonus spins round.

The game uses a cluster-pay mechanic meaning that it pays out for symbols when they land in clusters, as opposed to using traditional paylines. Like many cluster-pay slots, the game also has a cascading win feature. Whenever players land a win, the slot will remove the symbols and more will fall into their place. This continues until you don’t score a winning cluster.

Clicking the stake button in the bottom corner will allow players to choose how much they want to wager on each spin. The lowest available is £0.20, while the highest is £40. This is a fairly average betting range. This is not a huge problem though, as the game offers some good potential wins. The maximum win that can be landed in one spin is 1,848x the total stake. The game has an RTP of 96.08%. It is considered highly volatile.

You can also take Thor out for an adventure of your own, with the game being supported on mobile devices. The Thor’s Lightning mobile slot also looks fantastic and it boasts the same gameplay features as the desktop game. 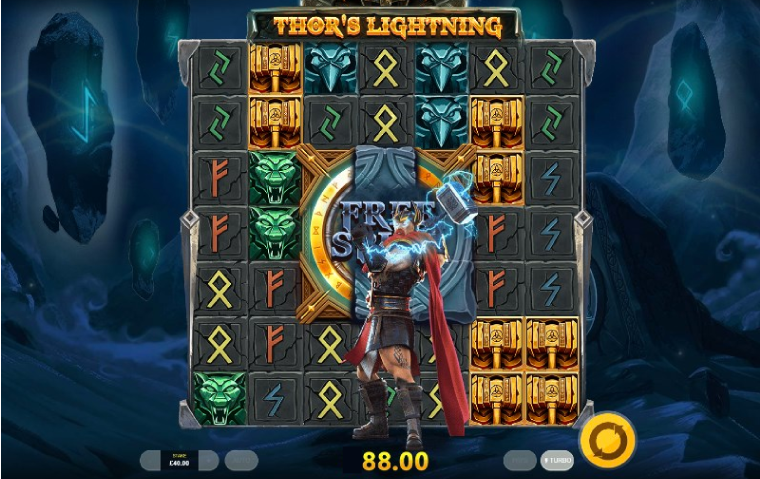 Red Tiger has really tapped into the power of Thor with the Thor’s Lightning bonus features. There are several bonuses on offer here, all of which help to boost the gameplay and the winning opportunities.

The Lightning feature can trigger at any point in the game. Thor appears and removes all pay symbols for a spin. It can also transform random symbols into new ones or, even better, into wilds.

Thor also uses his hammer to help players out. He throws the hammer at the reels to remove a random number and replace them with higher-paying symbols. It can also be used to nudge the reels to help secure winning clusters.

Whenever players land a winning cluster around the 3x3 grid in the middle of the reels, it will destroy adjacent blocks. Once all of the blocks have been removed, then one of the two following bonus spins rounds can be activated. Players will be rewarded with a random number between three and 20 bonus spins.

All standard symbols are removed and golden shields are added. These will stick whenever they land on the reels. At the end of the round, all of the shields will reveal random multiplier amounts that are then paid out.

The Muspell Bonus Spins is another bonus spins round with two additional features. For this, all lower paying symbols are removed from the reels. The Lava Shower feature can trigger at any time during the game and remove a further symbol. The Lava Flow feature can then create identical symbols on connected reels for the next spin.

Red Tiger always delivers hugely fun and engaging slot games, and Thor’s Lightning is them allowing their creativity to run wild. The game has a fantastic design and it brings the titular character to life in an entirely new way. The bonus features are also very strong - offering players a chance to land some big wins.