Players who are looking for something different from online slot games should check out Slingo. This combination of slots and bingo is incredibly fun and it offers plenty of good winning potential. Slingo Fortunes is just one of many great titles that have been developed by Slingo. This title has a Chinese theme, coming with several bonus features and a slick design. Let’s see what fortunes this has for us in this Slingo Fortunes slot review.

Slingo Fortunes take place, like all Slingo games, on a bingo-style score card with a reel underneath. This is made up of a 5x5 grid with an envelope occupying each of the 25 positions on it.

The game is nicely designed, with a simple red background and some intricate Chinese symbols and gold adding to the atmosphere. Slingo games tend to keep the soundtrack to a minimum, just adding a warped sound for when the reels spin and a victory sound when an envelope on the grid is opened.

The game remains the same when it is played on a mobile device, though, it is better experienced in landscape mode. It looks smooth on both Android and iOS operating systems and it is supported on most major mobile browsers at Mega Casino.

How To Play Slingo Fortunes 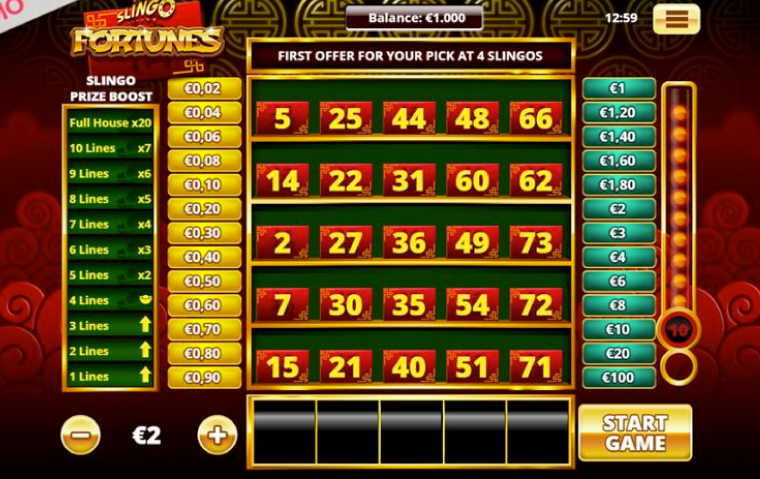 The objective of Slingo Fortunes is similar to the objective of a bingo game. Players will need to clear numbers from the grid and complete lines. In the game, these lines are called Slingos. Under the board, there is a reel which will display the numbers. In order to get the reel spinning, players will need to select their stake. The minimum stake is £1 and the max is £2, giving this, like many other Slingo games, a very limited range. At the start of each round, players will need to select their envelope. This then works similar to Deal or No Deal, with the game offering to buy your envelope as you progress and complete more Slingos.

The prizes for clearing Slingo lines are determined by the stake that the players choose. The maximum a player can win is 1,000x their stake. This is done by getting a full house and having the highest paying symbol on the board. The return to player for the game is 95% and it scores medium on the volatility scale. Almost all Slingo games will offer the same bonus features and Slingo Fortunes is no different. It sticks to the tried and tested formula of the Slingo games but as the old saying goes, if it isn’t broken, then don’t fix it.

On any random spin, a bonus spin icon can land on the reels. When this happens, it will be instantly added to your overall spin count and then pay out at the end of the round.

Fans of Slingo games are going to find plenty to like about Slingo Fortunes. The game features all of the classic gameplay mechanics and bonus features of a Slingo slot and mixes them all in nicely with a stylish theme. The Deal or No Deal inspired element to the game also adds a degree of excitement and gives this game a fresh feel. This is one of several great Slingo titles that players can play at Mega Casino.