The Olympian Gods are a great source of inspiration for online slot developers. This time period is full of inspiring legend and myth, and its rich history lends itself perfectly to the world of online slot gaming. The Olympians take centre stage here in Play’N Go’s Rise of Olympus online slot game. Let’s take a deep dive into the game in this review and find out what else it has to offer.

Rise of Olympus is a slot that really understands what people want from an Ancient Greece themed title. The game is set high above the clouds, with a beautiful greek temple creating the backdrop. Three of the gods, Hades, Poseidon, and Zeus, are the main characters here. All three of the characters have been given a bit of a modern makeover and they look fantastic.

To pay suitable homage to the gods, the reels in this slot are bigger than normal. The slot uses a 5x5 grid and a cluster pay mechanic. As such, there are no conventional paylines here - with the game paying out whenever symbols land in a cluster.

How To Play Rise of Olympus 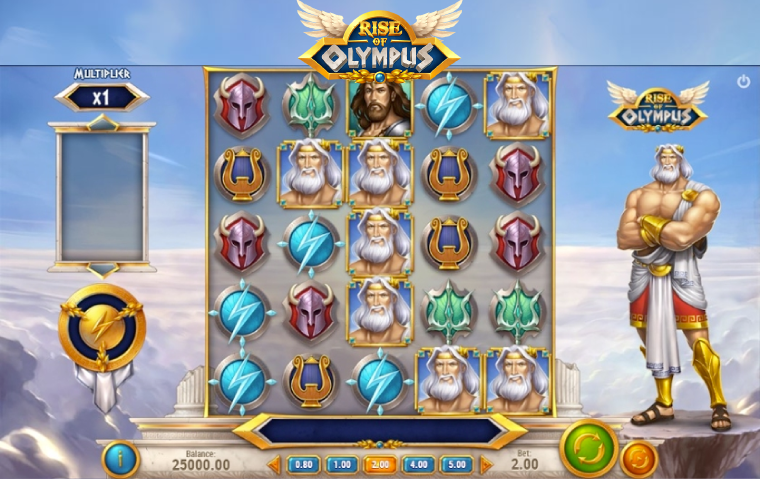 Play’N Go has putten a lot of thought into the design and gameplay of the Rise of Olympus slot game. To start things off, players can use the sliding scale under the reels to determine their stake. The minimum value is £0.20, and the maximum is £100.

The gods here are fairly generous too. The game boasts a strong RTP of 96.50%, and a maximum payout of 50,000x your total stake. Of course, the gods are not ones to be messed with though, with the game having a high volatility rating. 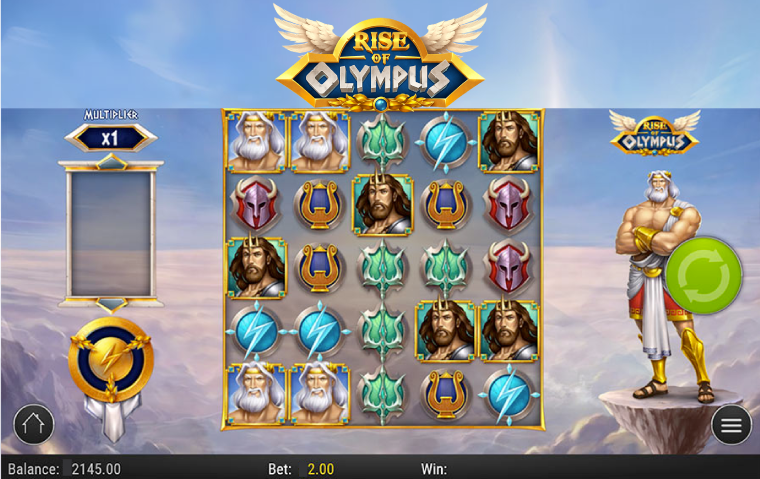 Play’N Go are not a company that cuts corners with bonus features, and the Rise of Olympus slot game is no different. The game utilises the power of the Gods to help players on their quest to secure some wins.

The Hand of God feature can trigger on any random spin in the game. This is a reel modifier bonus, with one of the three Gods using their power to help players out:

Whenever players land winning combinations, a meter is filled up. When it is full, the Wrath of Olympus bonus is triggered. For this, each of the three Gods takes their turn using their power on the reels.

If players can clear all symbols of the reels, they will trigger a bonus spins round. For this, players can choose between any of the three God powers to use. Whenever a non-winning spin takes place, the God’s power will then be used on the reels.

Rise of Olympus is a solid online slot game from one of the most trustworthy names in the industry. Play’N Go always delivers engaging titles and this is one of the best you will find at Mega Casino. The bonus features in the game and the theme complement one another nicely, and the choice between different bonuses in the spins round gives players a nice amount of control over how they play.