Rainbow Riches is one of the most iconic slot franchises in the iGaming industry. The original title, the one that is being reviewed in this Rainbow Riches slot review, is still in the eyes of many, the undisputed king of Irish-themed slot games. The title whisks players away to the Emerald Isle, getting them to play along with a charming little leprechaun as they try to seal big wins and trigger bonus features. Let’s take a deep dive into the game and see what it has in-store in this Rainbow Riches review.

Rainbow Riches sticks to a traditional approach to online slot games. The game is set deep in the heart of Ireland, with imagery from the Emerald Isle dominating the reels. The Rainbow Riches slot is the first of many in the series and as such, is probably the most dated from a visual perspective. That isn’t say it’s without its charms though, with the whole thing having a retro vibe that works nicely.

The action itself unfolds across a 5x3 matrix, with 20 paylines. The slot has an return to player of 95% and is considered highly volatile.

How To Play Rainbow Riches 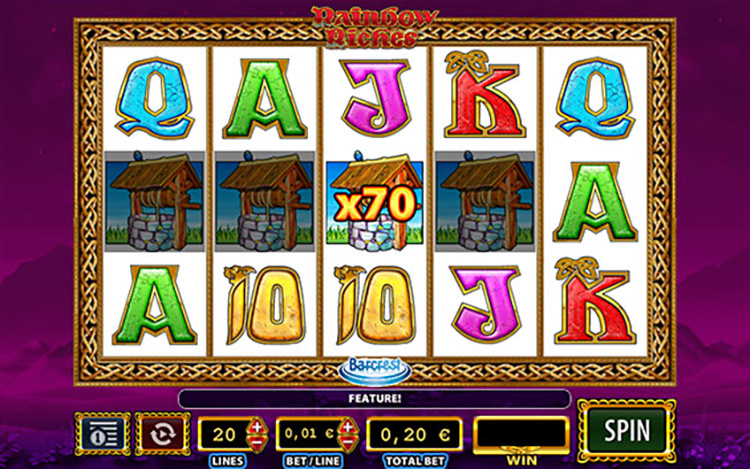 One of the reasons that the Rainbow Riches slot game has been such an enduring hit is its simple gameplay mechanics. As we’ve discussed elsewhere in this Rainbow Riches slot review, the game has 20 paylines that are active on each spin. Wins in the game are paid out are multiples per your line bet.

As well as the standard spin options, the game also comes with an autospin feature so you can sit back and let the leprechaun work his magic if you want to relax. The game can be played on both desktop and mobile from a minimum of £0.20, and a maximum of £400. This is a total of £0.01 per line or £20 per line. 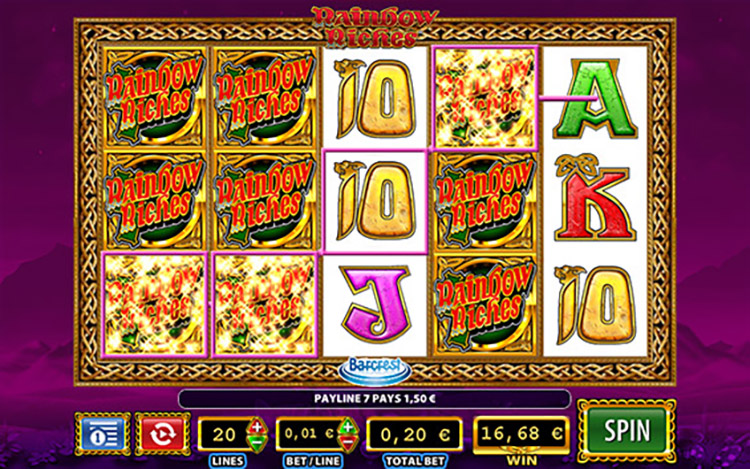 There are several Rainbow Riches slot bonus features for players to take advantage of. In order to trigger any of the three bonuses listed below, players will need to land three of their corresponding scatters symbols in a single spin.

Perhaps the most iconic feature in the series’ history, the Road to Riches feature is one of the three bonuses that can be triggered with three scatters. In this, characters spin a mini-reel to determine how many steps they will take along a path that is full of prizes. Of course, the reel also contains symbols that will end your adventure early. If you reach the end of the path, you can land a win of up to 500x your stake.

The Wishing Well is slightly less engaging than the Road to Riches but can still provide some good winning options. This is simply a pick-me game, where players must choose between three wells, each of which contains a multiplier prize.

Finally, the Pots of Gold Feature is similar to the Wishing Well bonus. The key difference here is that the Rainbow Riches slot will choose the outcome for you. In this instance, there are three pots - gold, silver, and bronze, spinning around, with an arrow choosing which one you win when they stop spinning.

While the Rainbow Riches slot game may look slightly dated now, don’t let its old-school aesthetic fool you. This was the game that launched one of the most enduring franchises in the iGaming world, and there are plenty of reasons why it has managed to maintain its popularity. The game’s simple but charming look and gameplay continue to make it one of the most engaging and enjoyable slot games available to play at Mega Casino.