Rainbow Riches is one of the most beloved franchises in the online gambling world. Barcrest’s original title was a huge hit, and since then, the company has built on its success with various sequels and spin-offs. The Irish are always a hugely popular source of inspiration for slot developers, and the Rainbow Riches series is a fine example of how to do them justice. Let’s explore the slot more in this detailed Rainbow Riches Reels of Gold slot review.

Like the Rainbow Riches titles that come before it, the Rainbow Riches Reels of Gold online slot game is set in the Irish countryside. Luscious green meadows roll into the distance, while stacks of gold coins surround the reels. The symbols here are as they are in other similar titles, with four-leaved clovers, harps, and of course, the brand’s leading leprechaun mascot, all making an appearance.

When you first load up the slot, you are going to immediately notice the giant set of reels sitting next to the normal ones. The game has two sets of reels - with a standard 5x3 containing 20 paylines, and then a colossal 5x12 set that takes the paylines up to 100.

How To Play Rainbow Riches Reels of Gold 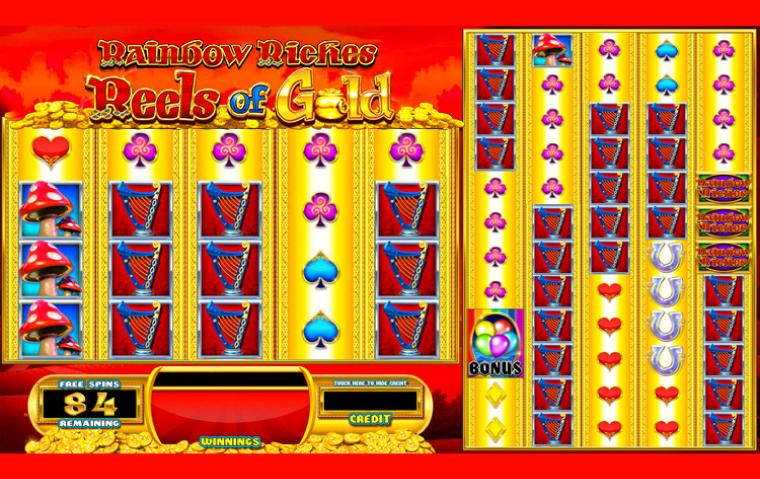 While Rainbow Riches Reels of Gold has a different reel set-up to standard slots, it still plays in the same way. The two reels will spin simultaneously and they do not require extra staking but paylines do not cross over from one set of reels to another. The only instance this happens in is using the Big Bet mechanic which we will explore later in this Rainbow Riches Reels of Gold slot review. To get both sets of reels moving, players can wager a minimum of £0.10 and a maximum of £500, which is a solid betting range.

As far as winning potential goes. The slot offers an RTP of 96%, though, this can rise up to an impressive 98% when the Big Bet feature is in play. The maximum win is 500x the bet, which is not huge but given the higher staking options, it is not surprising.

Barcrest has developed the slot using HTML5 technology. This ensures that the game can be played on a number of different devices including both mobiles and tablets. It is also supported on Android and iOS operating systems. 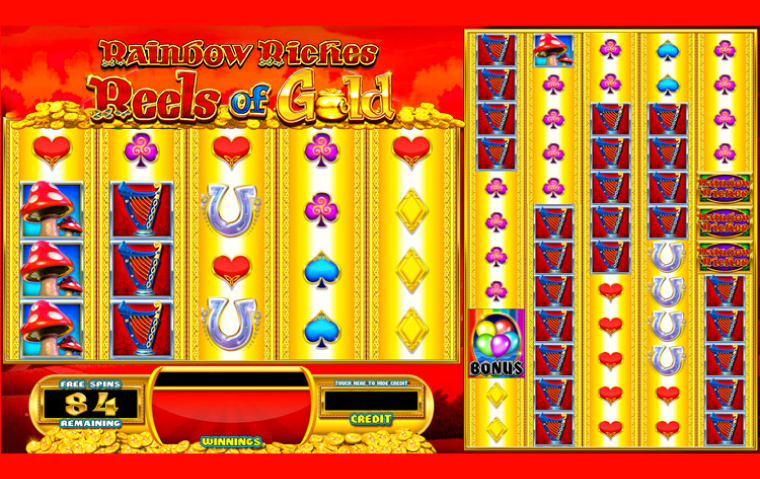 The Rainbow Riches series has become known for its innovation. This entry once again highlights that, with a range of top Rainbow Riches Reels of Gold bonus features being available for players.

At any random point during the game, a fairy can become active, fly onto the reels, and gift players with one of the following:

Magic Wilds -  Blocks of wilds will be added at random to the reels. These will then move around before stopping when they reach a winning combo.

Wild Burst - A group of butterflies will appear and land on the reels. These will transform into wild symbols.

Magic Symbols - All card symbols on the reels turn into a wishing well. These will then transform again into a matching symbol.

Reel Win Multipliers - All wins on the next spin will be given a multiplier of up to 5x.

Super Wild Stacks -  A stacked wild will appear on the main set of reels and then transfer to the corresponding reel on the colossal reels.

Ballon Bonus - The fairy can add additional spins in order to help launch the slot’s bonus spins round.

The bonus spins here are launched by landing three or more scatter across either of the reels. Before the spins start, players are given the chance to either increase or double their spins through a guessing game and a pick-me style game using balloons.

The Big Bet mechanic allows players to stake bigger bets in exchange for access to all 100 paylines across the two reel sets.

As we have covered in this Rainbow Riches Reels of Gold review, the slot has plenty to offer fans in terms of gameplay and bonuses. The series has always been one that has never stuck to a formula and has always done something different with each game, and that is definitely the case here. This is one of several Rainbow Riches slots worth taking for a spin at Mega Casino.