Quickspin puts a fresh perspective on the popular Ancient Egyptian theme with the Phoenix Sun slot game. This title sets the titular legendary bird soaring high above the pyramids, offering a different take on a well-worn theme. Does it manage to do anything more than just give the theme a lick of paint though? In this Phoenix Sun slot review, we are going to break down the slot’s overall gameplay, winning potential, and bonus features.

There’s a well-established blueprint that can be followed for Egyptian-themed games, and the Phoenix Sun online slot game mostly sticks with that. The reels are full of the standard symbols you would expect to find, with Anubis, Tutenkamun and other well-known Egyptian figures making appearances. The backdrop depicts the pyramids, with several of them fading off into the background in a sand-covered haze.

As far as the set-up is concerned, there are five reels and three rows to start with, but players will notice that some additional spaces are blocked out. These are unlocked throughout the game at different intervals, which is something we will come to later in this Phoenix Sun review.

How To Play Phoenix Sun 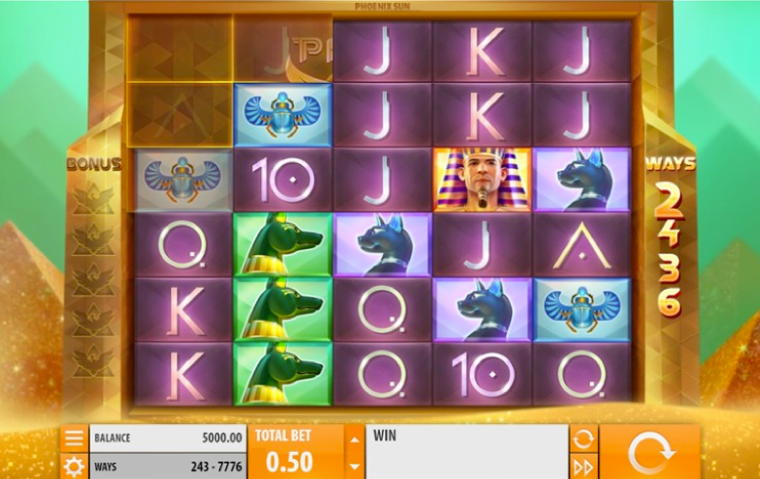 Of course, you will need to have your stake set before you have access to any of this. The lowest bet that can be placed here is £0.25, while the maximum is £100, giving this plenty of range for players. The RTP of the slot is 96.08%.

If you want to take this for a spin when you are away from your desktop, then you can always use the Phoenix Sun mobile slot. The game is fully optimised for mobile use and it looks just as great when it is being played on a smaller screen size. 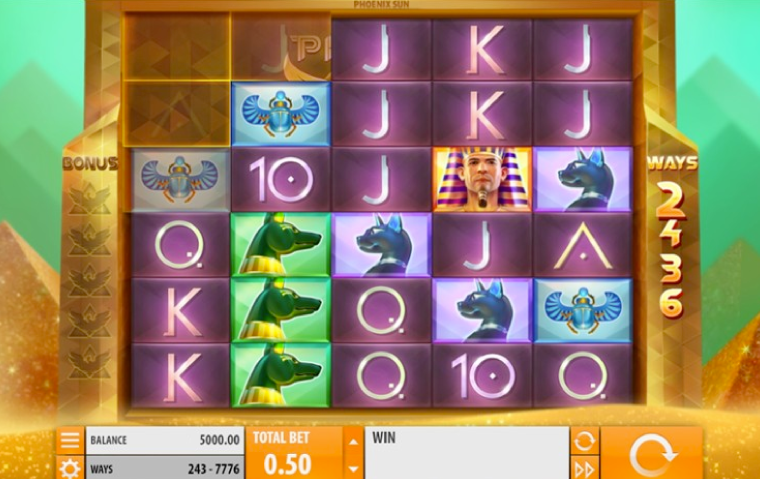 The key to success in the Phoenix Sun slot game is unlocking all of the additional rows in the game. To do this, you will the help of some of the Phoenix Sun bonus features.

Whenever a wild symbol is part of a winning bet line, the game will players an automatic respin. When this happens, the wild will also remove additional blocks from the top of the screen and boost the number of ways to win for that respin. This can continue to happen until no more Phoenix Wilds make an appearance.

The Phoenix Sun slot game from Quickspin is really nicely designed and it manages to make itself feel fresh in comparison to some other Ancient Egyptian slot games. The game packs some good winning potential and the increased number of ways to win and the dynamic bonus features make this a thoroughly engaging slot. This is one of many great Quickspin titles that players can find in the Mega Casino slot catalogue.