Slot games are a great medium for reimagining classic tales. Whether it’s the likes of Sherlock Holmes or Van Helsing, many historic characters, fictional and real, have been given the slot game treatment. Now it’s the turn of Herman Melville’s classic novel, Moby Dick. The story of one man’s quest for revenge against a great whale is one of the most iconic of all time, and Rabcat and Microgaming have brought it to life in a whole new way. Does the Moby Dick slot live up to the legacy of the story that inspired it though? Let’s take a look and find out.

The Moby Dick slot game does a great job of recreating the setting where the main novel takes place - the deep blue sea. The game is set out on the high waters, with the game’s reel floating on the high seas.

Characters from the novel create the symbols and can be found on the slot’s 5x3 grid set-up. The main character in the novel is Ahab, and he, alongside Moby Dick is among the highest paying symbols in the slot. Landing these in high combinations across the slot’s fixed 25 paylines can bring in some good wins.

How To Play Moby Dick 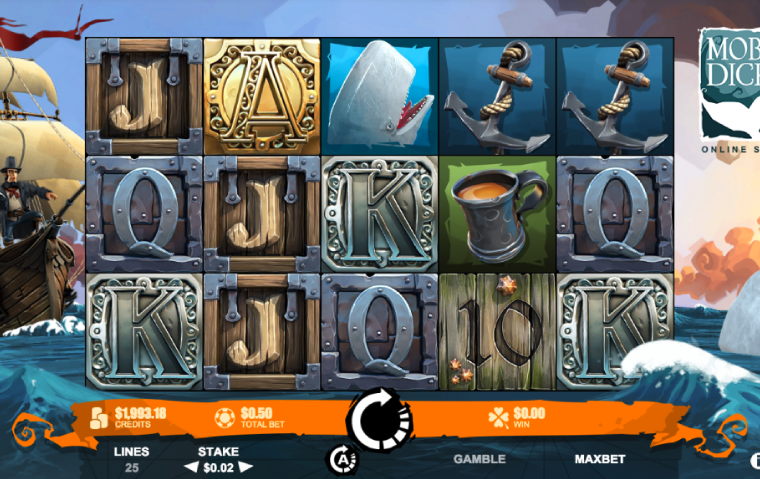 The Moby Dick slot game is nice and easy to get started. The minimum stake per line in the game is £0.01 and the maximum is £2. As we have mentioned elsewhere in this Moby Dick slot review, the game has 25 fixed paylines. You can see these by heading over into the slot’s paytable using the menu button at any time during play.

In the paytable, you will also find some other useful information. This includes the slot’s maximum win of 200x the overall stake and the fact that it has a return to player of 96%. These are both solid numbers underlying the game. If players want to sit back and let Ahab hunt for Moby Dick on his own, they can use the autospin feature to take up to 100 spins on their behalf.

All of the same gameplay mechanics are present and correct when you play the Moby Dick mobile slot game on smaller screens. The game maintains its charm on mobiles and tablets, with the slot working best when played in landscape mode. 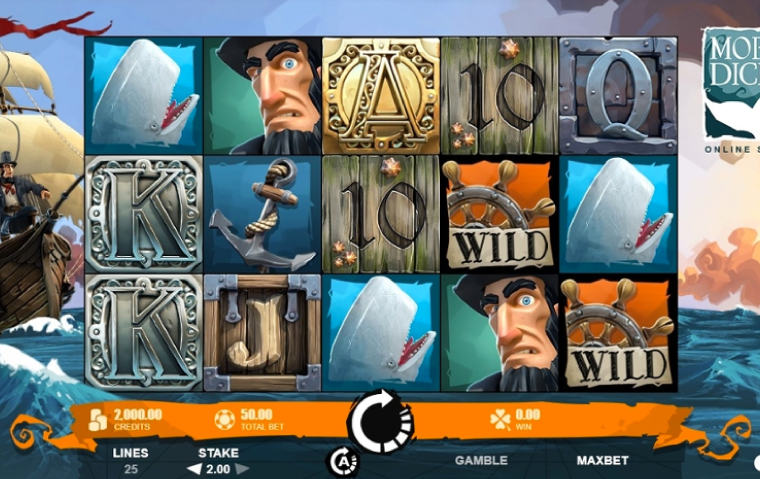 Catching Moby Dick is always going to be a difficult task. Microgaming has ensured that there are some Moby Dick bonus features available to help you along the way..

Whenever you trigger a win with three symbols or more, the symbols as well as any scatter symbols are frozen and a re-spin occurs. This can be used to boost any wins. It will continue to happen until no more improvements can be made to the win. It will also happen when three scatters land in order to try and help players trigger the bonus spins.

The Moby Dick bonus spins are landed when four or more scatters are landed. Four gives 10 scatters, five give 12, six give 15, and seven or more reward 20 bonus spins. The spins can be retriggered during the round.

The slot puts a new spin on the traditional gamble feature. When players land a win, they can gamble their winnings by choosing from one of two teacups. One of them contains a teabag and the other contains a fishbone. Landing the former will double your winnings, while the latter will see them lost.

Bringing such an iconic tale to life for an online slot game is no easy task, but Rabcat and Microgaming have made it look easy. The Moby Dick slot game is one of the best novel-inspired titles you will find at Mega Casino. The game’s design and gameplay are both really easy on the eyes and the bonus features are just the cherry on the top.