One theme that has become increasingly popular in the world of online slots is mining. This makes a lot of sense, as the idea of mining for gold lends itself perfectly to spinning the reels and trying to get your hands on some potential winnings. Rabcat has decided to grab its pickaxe and head down the mines with the Mining Fever online slot game. This title combines the theme with some useful bonus features and reel modifiers. In this Mining Fever review, we are going to explore all of these and find out whether this is a mine that is worth spending some time in.

The Mining Fever game does a great job of bringing the mine that it inhabits to life. The symbols in the game are made up of miners and things that you would expect to find in a mine. This is all brought to life with some a really playful and fun design. The characters have been drawn in a cartoon style, while the mine itself is littered with gold and is incredibly colourful. Sitting right in the middle of the screen is the game’s 5x3 grid, with a very clear control panel and layout set around it.

How To Play Mining Fever 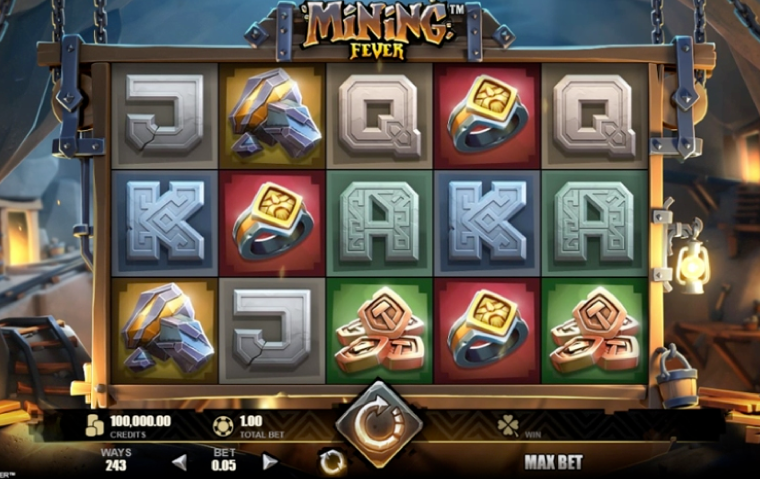 The standard set-up of Mining Fever hides a higher number of ways to win that are on offer. The slot has 243 ways to win on each spin. The slot can be played from £0.20 up to £40, which isn’t the biggest betting range but is still going to appeal to players on lower budgets. The slot is also rated low on the volatility scale, which once again is likely to appeal to a similar crowd.

As far as winning potential goes, players can land a maximum win of 500x their overall stake on an individual spin, a solid number. The low volatility model of the game means that the bonuses are triggered more often than in other titles, though, bigger wins are few and far between. Rabcat has also developed the title to make sure it looks and works great on a mobile device. Whether you’re on a mobile or a phone, Android or iOS, the gameplay experience still remains great. 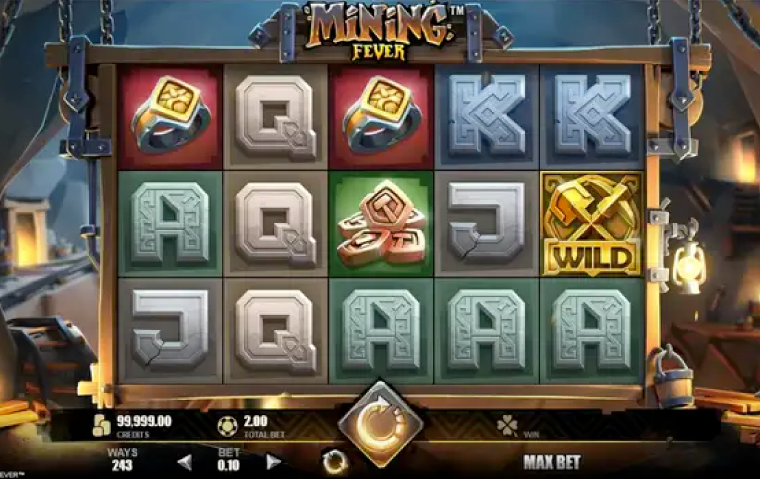 Mining can be hard work, and Rabcat is well aware of this. As such, it has loaded this up with some great Mining Fever bonus rounds and reel-modifiers.

There are three different scatter symbols in the game, each of which triggers its own reel modifier. Each of these is triggered when two of its corresponding symbols land on the reels.

The Mining Fever slot also offers a bonus spins round. It is triggered when players land one of each of the scatters. Players are rewarded with eight bonus spins for the round.

The bonus spins also feature the Dwarven Gold Train feature. This is a train of three wilds that spreads across three reels. It rolls over the reels and then comes back on the other side once it falls off. It can lead to some of the best winning opportunities in the game.

Rabcat delivers a solid mining theme slot with Mining Fever. While the game doesn’t offer the huge winning potential that many titles will a similar theme may have, it does compensate for this with some engaging bonus features. The three additional bonus features really keep the slot feeling fresh, and stop too much repetition. As well as this, it has a really nicely drawn design that creates an enjoyable atmosphere.