The Jade Rock is one of the most beloved and treasured in all of Chinese culture. It is said to be a symbol of wisdom, power and wealth. Red Tiger Gaming would hope to bring all of those things to their players in the Mega Jade slot game. This luxurious slot title keeps things minimal but manages to pack quite the punch. In this Mega Jade review, we are going to explore everything that the slot has in store for us and hope that it brings the things that it promises.

The Jade symbol is one that is linked with luxury and riches and that is displayed through the design and feel of this slot. The game glistens with gold and jewels, giving the whole thing an expensive feeling. It is very minimalist but it is extremely effective. After all, those people will real wealth don’t feel the need to show it off.

Navigating the game screen is really nice, with the five reels of the slot sitting right in the middle of the screen and the control panel just underneath. The symbols in the slot feature four different shaped Jade stones and then stylised versions of the poker symbols. The slot is bathed in green and gold, two colours that are commonly associated with luck.

How To Play Mega Jade 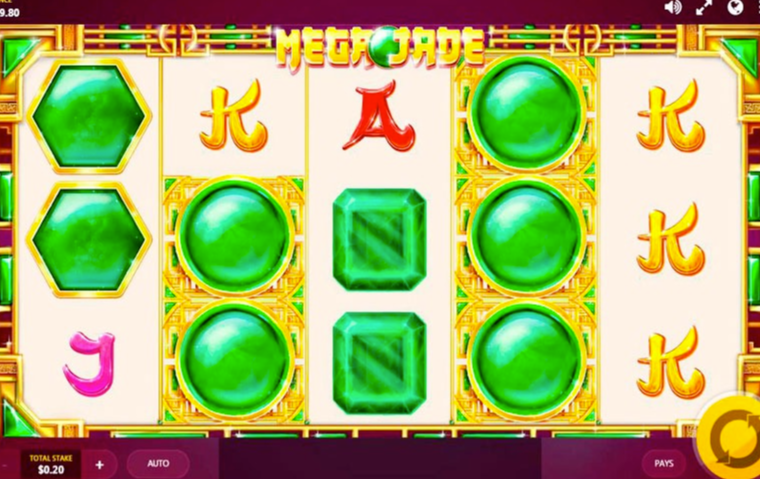 The minimalist interface makes the gameplay for the Mega Jade slot game nice and simple. Players need to first select their stake using the +/- buttons located on either side of the bet in the bottom corner. The minimum wager here is £0.20 and the highest is £100, which is fairly typical for most top online slots.

The slot has five reels, three rows, and 10 paylines. Don’t let this basic set-up fool you though, this is still a slot that manages to pack some punch. Players are able to secure a top win in the game of 888x their overall stake. The RTP of the slot is 96.10%, which is a nice amount that puts it higher than the average of 96% found in most slots.

The simple design is also perfect for playing on mobile devices. The game still looks fantastic when it is being played on a smartphone. We found that it was best enjoyed in landscape mode on tablets and phones. 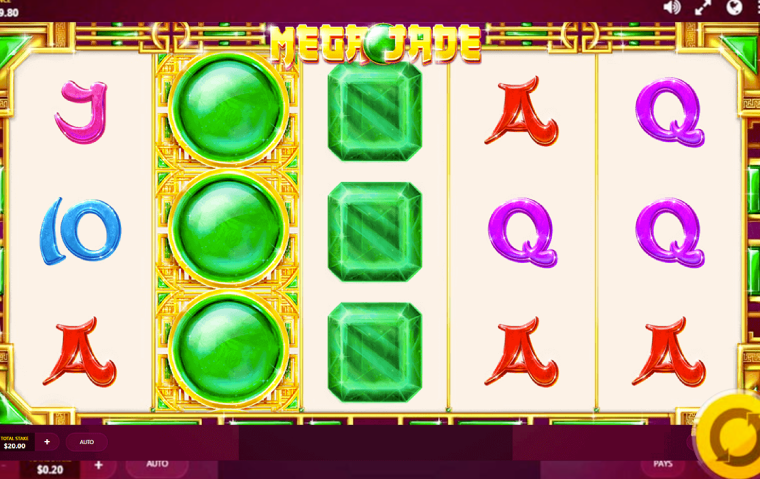 While Red Tiger Gaming typically opts to load up their slots with bonus features, it has decided less is more in the case of the Mega Jade game, with just the one bonus feature.

The main Mega Jade bonus feature is the one that the game itself is named after. The Mega Jade symbol is said to bring spades of luck to its players. It is a 3x3 symbol that can appear at random intervals throughout the game. Whenever the symbol lands, it gives a guaranteed win. If it lands in combination with other Jade symbols, then it can lead to some of the biggest wins available in the slot.

When players first load up the Mega Jade slot, they could end up being surprised by the perceived lack of bonus features in the game. Don’t be fooled by this though, as this is a slot that manages to pack a serious punch. The titular Mega Jade bonus offers a guaranteed win whenever it lands and its winning potential more than makes up for the lack of other bonuses. Outside of the bonuses though, the game offers a good RTP and excellent gameplay mechanics that are a joy to use. Don’t be put off by the lack of bonus spins, this is a top online slot worth playing.