You’ve heard of Ocean’s Eleven, well now it’s time to meet Lake’s Five. This lovable gang of outlaws is brought to you by the creative team at ELK Studios. The gang are on a quest to perform an ambitious heist in, of course, Las Vegas. Players are on hand to help them out, and so are some great bonus features. Let’s catch up with the gang and see what they have in store in this Lake’s Five online slot review.

ELK Studios are well known for their colourful characters and funky designs, and they have not let us down with the Lake’s Five slot game. The central premise in the game is amusing in itself, with the slot following five creatures led by a charismatic moose called Mr Lake. He has gathered his most trusty worth friends, including a pink elephant, a goldish, a rhino, and a parakeet. The game looks great and it is accompanied by some fun sound effects. As far as set-ups go, things are kept fairly conventional, with five reels and four rows.

How To Play Lake's Five 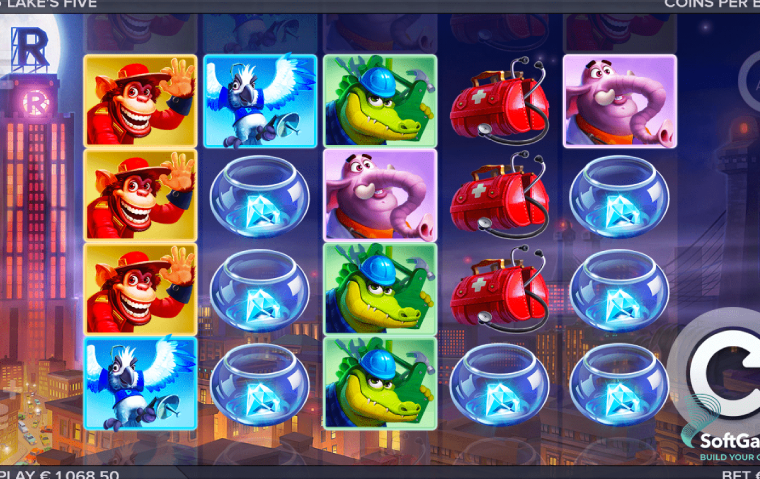 The general set-up of the game is simple, but don’t be fooled, as the slot offers 178 different ways to win. Players can access information about these using the paytable at any time. Each bet in the game consists of 100 coins, but this isn’t something players really need to worry about. The stakes are still displayed as standard bet sizes, with the minimum being £0.20 and the maximum being £100.

The biggest win on offer in the slot is 216,000 coins, which totals 216x the player’s overall stake. While not the highest number it’s certainly not a bad amount. The RTP of the slot is 96.3%, which sits above the industry average and will please players. ELK has given it a 7/10 rating for the volatility.

You can also help Mr Lake and his gang using your mobile phone or tablet. The game runs smoothly on Android and iOS operating systems and is supported on most major mobile browsers. 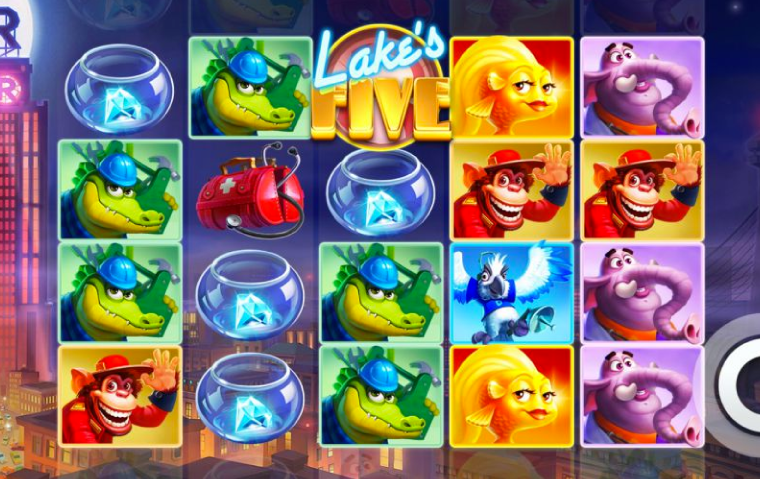 If Mr Lake and his gang are going to be successful at getting away with their robbery, they are going to need a little bit of help from the Lake’s Five bonus features.

The main bonus in the game is the bonus spins round. Three scatters will launch the round, with 10 spins being given. This is increased every time a player lands a key in the round. Speaking of the key, these are collected to help launch a selection of wild features.

There are three wild features that can be unlocked in the game. If players collect three keys, then a walking wild symbol is added which moves one reel to the right on each spin. The next three will unlock a sticky wild which will stay on the third reel, and finally, a climbing wild which moves upwards on reel five is added once players have collected nine keys. It’s important to remember that each of the keys adds an additional bonus spin, which means this round can go on for some time with some of these features.

Wild respins are triggered when players land two scatters on the reels. These will turn into walking wilds which will stay on the reels until they reach the last one.

The Lake’s Five slot game is a really fun outing from ELK Studios. The game has a fun set-up and theme, but don’t let this fool you. The slot’s bonus features pack a serious punch, with the wild features helping to boost the game’s winning potential. All in all, this is a highly enjoyable slot with a unique and memorable theme.