The world of rock’ n roll lends itself perfectly to online slot development. Larger than life characters, recurring themes, and an awesome discography can be combined perfectly to make a hugely enjoyable slot and that is exactly the case with Guns N’ Roses from NetEnt. This exciting slot title leans into the band’s history, its players, and its songs to bring players a hugely engaging slot game. Let’s rock out and find out more in this Guns N’ Roses slot review.

If you’ve ever played a band-themed slot before, you will know that they all tend to stick with a similar design. The game’s 5x3 reel set is positioned as the main stage at a concert, with hundreds of fans waving around and celebrating at the foot of the game’s control panel.

It wouldn’t be a Guns N’ Roses themed title without some of their biggest hits being available for players, and NetEnt has given you the ability to choose your favourite to play while you spin. You can click on the playlist option to change the song at any point during the game. While you don’t have to be a Guns N’ Roses fan to enjoy the slot, it does definitely add an extra level of enjoyment. The band members themselves all make appearances on the reels as symbols in another piece of well-executed fan service.

How To Play Guns N' Roses

Before you rock out, you will need to make sure all of your equipment is tuned up and ready to use. The game has 20 active paylines for players, with 10 different bet levels available. There must be 20 coins available on each spin. The minimum coin value is £0.01, totalling a £0.20 minimum at bet level 1, while the maximum coin value is £1, which comes to £200 on the highest bet level. This is a great betting range that is going to appeal to most players.

The underlying numbers here are also strong. The maximum win is 1,250x, which is solid enough, and the RTP is a very impressive 96.98%, which puts it higher than the industry average. 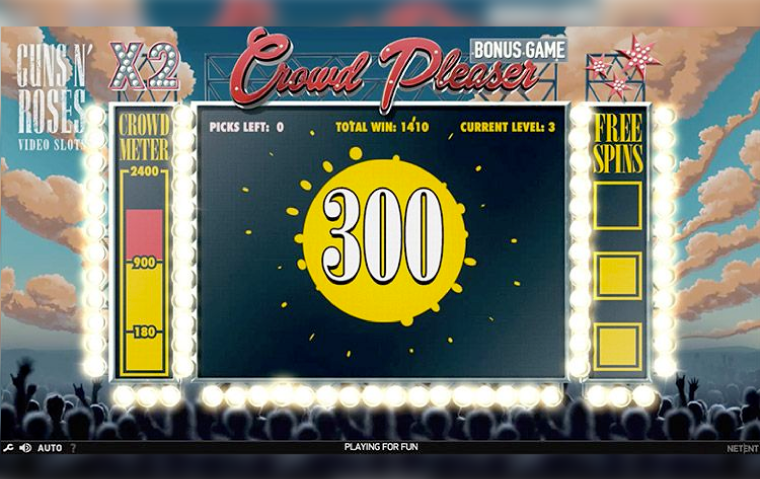 Guns N’ Roses really know how to amp up the action and get their fans excited, and the Guns N’ Roses slot shares that quality. NetEnt has loaded this title up with some great bonus features, including some in-game mechanics and bonuses that require triggering.

The following bonus mechanics can be triggered at random at any point during the slot’s base game.

With some themed slots, developers are content to just rely on the theme as the game’s selling point. That is far from the case with the Guns N’ Roses slot game from NetEnt. This title not only pays fitting tribute to the band, but it comes loaded with innovative gameplay and bonus features. It is one of the best music-themed slots available at Mega Casino.