The Genie Jackpots slot game is a classic title from Blueprint Gaming. Anyone who has ever played a Blueprint Gaming title before will know that they are packed to the brim with bonuses and engaging gameplay. Needless to say, with a name like Genie Jackpots, this is a title that offers some great winning potential. Are the jackpots all that this game is about though or does this Genie manage to work his magic elsewhere? Let’s rub his lamp and find out in this Genie Jackpots slot review.

Genie Jackpots is a well-designed slot that packs plenty of charm. The Genie in this game is not the bright-blue Genie you might find in a Disney movie, but it’s not far off. He is a big purple guy who pops up at multiple points throughout the game.

His monkey, lamp, some swords, and hat all make an appearance on the reels. Speaking of which, there are five reels and three rows in the game, giving it a traditional set-up. These reels are floating high above the clouds on a beautiful Arabian night. The sky is kissed with purple and clouds help to conjure up appearances from the titular Genie. The slot also shifts to brighter settings for some of the Genie Jackpots bonus features.

How To Play Genie Jackpots 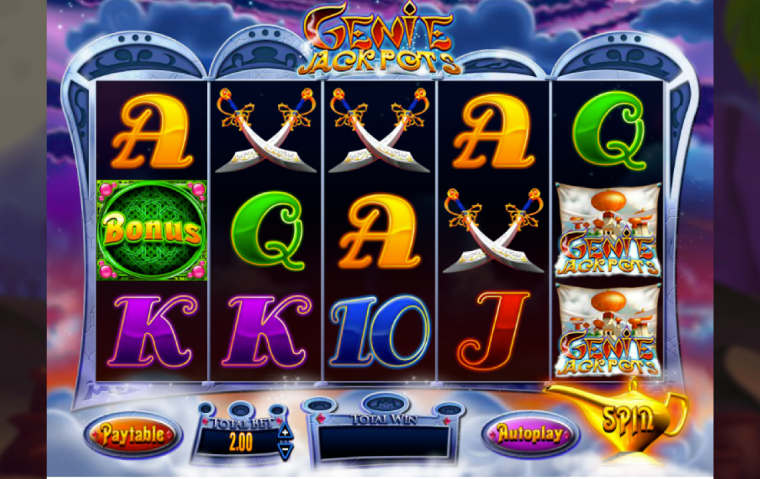 You won’t need to be magic to get the Genie Jackpots slot working. As we have mentioned elsewhere in this Genie Jackpots slot review, there are five reels and three rows, with the game sticking to its traditional routes and offering 20 fixed paylines on every spin. There are some good betting options available as well, with players able to wager between £0.20 and £500, which should cover just about every budget imaginable.

A game wouldn’t earn itself the name jackpot if it didn’t offer some good winning potential. The maximum win available in the slot is 10,000x the bet, though, the Jackpot King Deluxe jackpot can be much higher than this. The base game jackpot here is 92.73%, but with the jackpot factored in this can reach 96.54%, which is above the industry average. 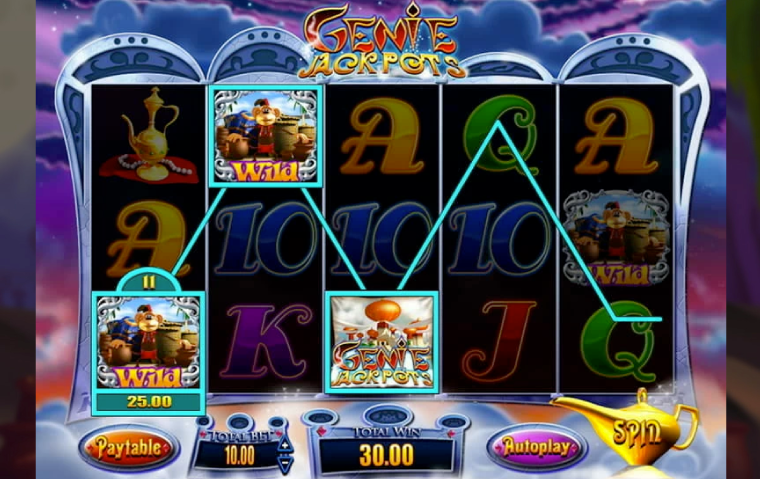 Genies are famous for their abilities to work their magic, and Blueprint has sprinkled plenty of that into the Genie Jackpots bonus feature selection.

The Mystery Win feature is triggered when you players land two scatters on reels 1 and 3 and the Chest scatter on reel 5. When this happens, a pick-me-style game is triggered where players pick from treasure chests and lamps until they reveal a collect symbol and their winnings are paid out.

To trigger this one, players need scatters on reels 1 and 4 and a Magic Carpet symbol on reel five. This is a trail-style feature where players can unlock cash prizes along the way. Reaching the end of the trail can see a win of 1,000x the overall stake rewarded.

This bonus can be triggered at random when the Genie appears from the lamp. Players must then choose from a selection of magic lamps to reveal their prize. Infectious monkey wilds can be added to the reels, turning other reels wild, or Genie Wilds can be added that can double the player’s win or respin the reels for two big wins.

The slot is also part of the Jackpot King network. The Jackpot King mini-game can be launched at any time at random during the game. This takes place on a separate set of reels, with players needing to match three symbols to their corresponding jackpot in order to win.

Blueprint Gaming slots are always packed with brilliant special features, and Genie Jackpots is no different. The slot is really engaging and offers plenty of innovative and potentially lucrative bonuses in order to keep things entertaining. The addition of the Jackpot King Deluxe jackpot only adds to the excitement and the winning potential. This is a genie well worth making a wish with over at Mega Casino.