The original Foxin Wins slot game was a hit for NextGen. As such, the company has decided to revisit the property with the Foxin wins Again slot. The game is a direct sequel to the original, with the titular Fox taking to the seas for a much-needed break. Does this nautical-themed adventure manage to live up to its predecessor though? Let’s find out in this detailed Foxin Wins Again slot review.

In the original Foxin Wins slot game, the titular character’s mansion was being plagued by a sneaky little leprechaun. Thankfully, that little green fella seems to have disappeared and the Fox has been able to head out onto the open waters on his cruise. The design of the game is nothing too fancy, with the deck of a luxury boat providing the background for the slot’s 5x3 reel set. The Fox himself, as well as his little pup, both make appearances on the reels, with the pup easily being the most memorable character. He sits beneath the reels, looking on and waiting to deliver some wild symbols.

How To Play Foxin Wins Again 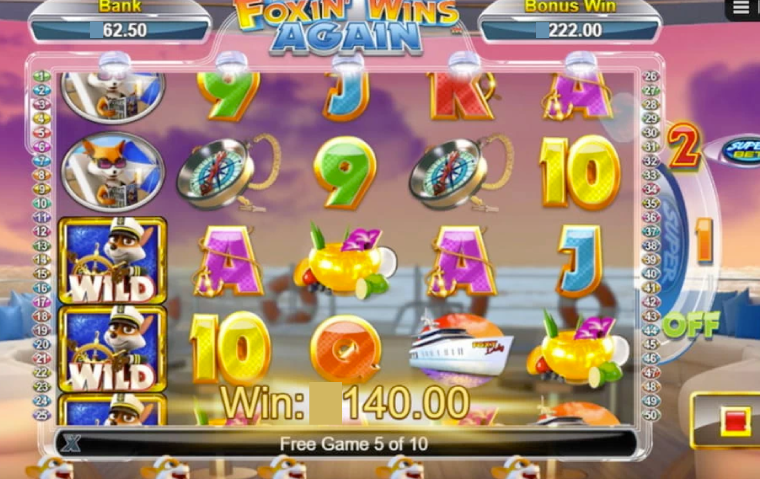 Foxin Wins Again plays very similarly to the original Foxin Ways slot game. On the 5x3 grid, players will find 50 fixed paylines. All bets staked in the game are per line, with the minimum being £0.01 and the maximum being £1. This does give quite a limited betting range of £0.50 to £50, which may not suit some players’ budgets.

The theoretical RTP of the slot is 95.88%, and the game provides players with the chance to score a win of up to 5,000x their line stake, which comes to 100x their overall stake. Players can find out all of this info and more by accessing the slot’s paytable.

As always, NextGen has developed the slot to ensure that it is mobile-friendly. There are a few slight visual changes but no gameplay changes when you play the Foxin Wins mobile slot game. 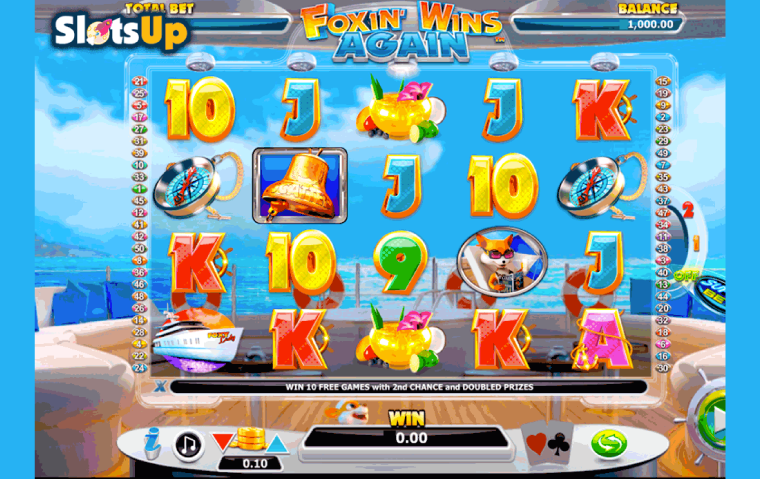 If you’re going to help the Fox get his hands on some extra cash, then you are going to need some help from the Foxin Wins Again bonus features.

The Foxin Wins Again bonus feature is launched when players hit three or more of the bell scatter symbols hit the reels. Players will then be given 10 bonus spins. During the spins, there is an increased number of Fox Pop wilds appearing on the reels. All wins in the bonus spins are doubled.

To spice things up, players are given the chance to retrigger the bonus spins round. The only catch is, that they will have to give up their original winnings. This can be a great feature if your first round of bonus spins was disappointing. Of course, the grass isn’t always greener so approach with caution!

Fans of the original Foxin Wins slot are going to love this nautical makeover, while newcomers will also find plenty to enjoy. The slot has a lot of fun with its bonus features and has a fun design. While it may not be the most innovative of titles from NextGen, it is a solid continuation of a property that has proven to be popular for them in the past.