The Fluffy Favourites series has been nothing short of a bonafide success for developers Eyecon. The loveable fairground themed original spawned a sequel and has become a huge hit among players. What’s the next step then? To blast the cuddly bears into space, of course! Fluffy in Space takes the original cast of characters and launches them into space. Typically, when a movie does this, it is because the series has run out of ideas, but that is far from the case here. Let’s jet off into space and find out more in this Fluffy in Space slot review.

Fluffy in Space takes the original characters from the Fluffy Favourites game series and gives this a makeover. The slot is set deep in space, with all of the characters wearing different variations of a spacesuit. This gives the title a really charming and amusing feel and helps it to stand out from previous entries in the series.

The fun takes place on five reels, each holding up to three rows. This is the kind of set-up players can find in most top online slots and was the one that served previous games in the series so well.

How To Play Fluffy in Space 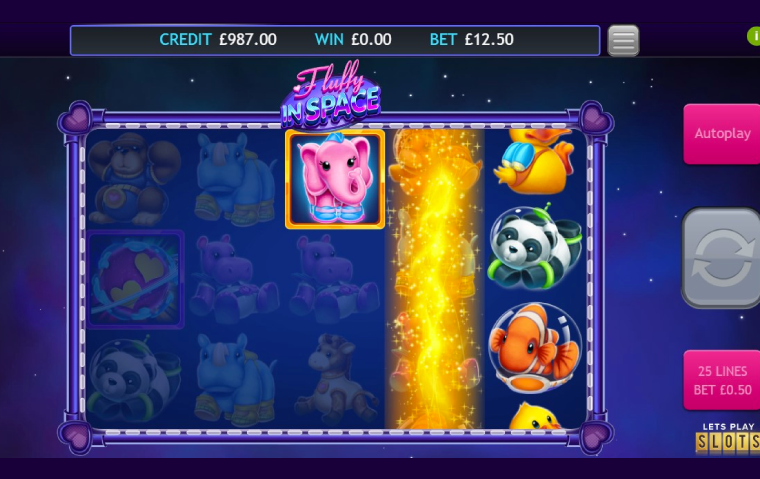 Unlike most Eyecon slot games, the number of paylines in the Fluffy in Space slot is not adjustable. This is not a problem though, with the game offering players 25 paylines on every single spin. The minimum wager per line is £0.01 and the maximum is £0.50. This brings the minimum and the maximum in the slot to £0.25 and £12.50. It’s a small betting range that is going to attract players on more conservative budgets. 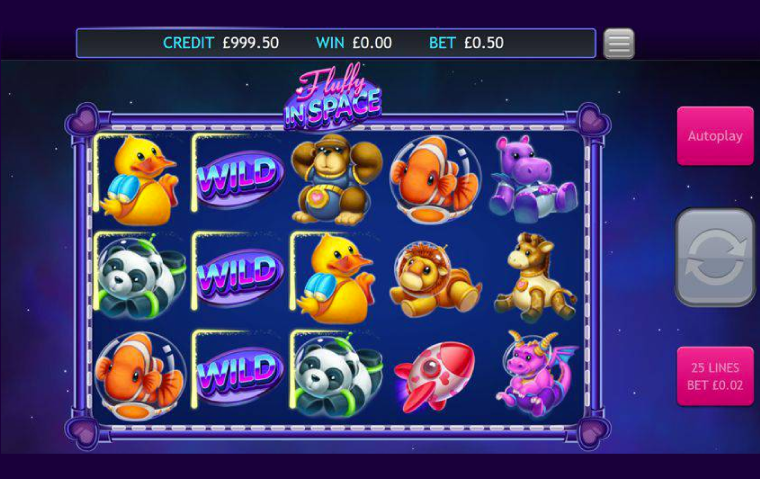 Eyecon has provided some fun bonus features to help inject a little bit more action in the Fluffy in Space online slot game.

Landing three or more of the scatter symbols will see players rewarded with six bonus spins. To make this feature more exciting, it can be retriggered by landing more scatter symbols. In total, players can retrigger this up to 50 times, giving a total of 406 bonus spins, which is an impressive number by anybody’s standards.

While Fluffy may grab the headlines, it is Nellie that is the key to success in this slot game. Landing three of the Nellie symbols on reels 2, 3, and 4 will trigger a respin bonus. For this, the Nellie symbols are held in place and the reels are respun. Players are initially given three re-spins, but this is reset every time another Nellie symbol lands. At the end of the round, all Nellie symbols will reveal a cash prize. These are then collected and paid out.

Sending a franchise into space could have easily been an excuse to just reskin an existing title and give players the same old game. Eyecon has taken the much more difficult route and provided players with an engaging online slot game that offers great bonus features and some really neat visuals. This is one of the best entries in the Fluffy Favourites series and is worth hunting down and spinning at Mega Casino.