Eye of the Amulet Slot Review

Archaeological discovery and Ancient Egypt are two very popular themes for online slot games. iSoftBet has combined the two with the Eye of the Amulet online slot. In this game, players join two brave archaeologists as they head into the desert, braving storms and other dangers, in the hope of getting their hands on some ancient artefacts and, hopefully, some treasures. What do they find? In this Eye of the Amulet slot review, we are going to break down everything that the slot has waiting for us.

Eye of the Amulet Slot Details

The blistering heat of the Egyptian sun blasts down on the reels as you play the Eye of the Amulet online slot game. Not all is calm though, as a dangerous sand storm brews, threatening to blow over the game’s 5x5 grid and wreck havoc. All of this is brought to life with some fantastic graphics thanks to iSoftBet.

As far as symbols go - the two explorers make up the highest paying in the game. They are joined by a range of Egyptian iconography and monuments including a necklace depicting the Ankh, the Eye of the Amulet itself, and the Sphinx.

How To Play Eye of the Amulet 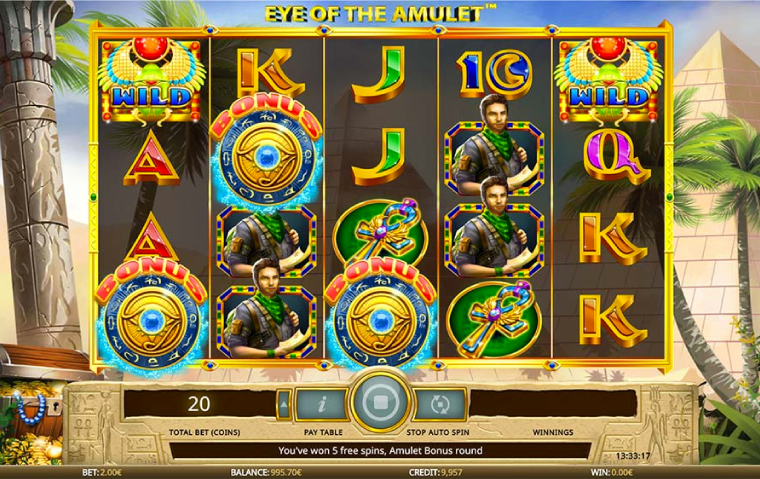 As we have already discussed in this Eye of the Amulet review, the slot takes place on a 5 reel by 5-row grid. This doesn’t increase the number of ways to win too much though, with the slot offering just 40 fixed paylines.

Spinning the reels here is easy to do. Players will need to select their stake, which is worth 20x the coin value. The maximum stake is £20, while at the other end of the scale, players can bet as low as £0.20. This makes it quite a low-stakes slot. This is also reflected in the game’s winning potential, with 250x the player’s stake being the maximum win. It is not a very volatile slot game. It offers an RTP of 96.5% though, which is above average.

The Eye of the Amulet mobile slot is just as much fun to play as the desktop version. It retains all of the same gameplay features and can be accessed across different browsers and platforms. 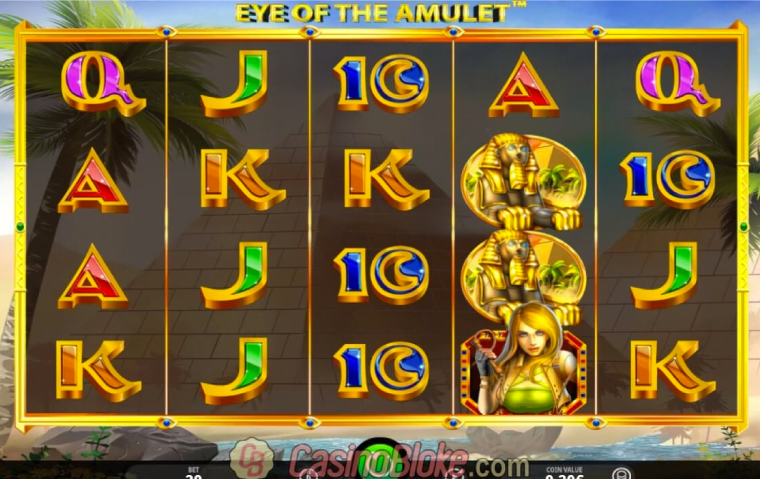 iSoftBet has developed some fun Eye of the Amulet bonus features which help to elevate the game above the usual Egyptian themed tropes.

Players will be given five bonus spins for landing three of the Amulet scatter symbols. Four hands out 10, while five rewards 15. Before the round starts, players get to spin a bonus wheel to get extra features. This can include extra wilds, extra spins, or multipliers. In some cases, it can be a combination of these things. Extra scatters during the round can add additional spins, with 100 being the max allowed.

The Sandstorm feature can kick in on any random base game spin. When this happens, a storm blows across the reels. It leaves behind new wilds and also shakes up the existing symbols. This can cause additional winning combinations for players.

Eye of the Amulet Verdict

Those looking for something different from the litany of Egyptian themed slots around will enjoy the Eye of the Amulet slot game. Not only does the game look great, but it also offers some really fun bonus features. The Sandstorm feature is a great addition to the base game, while the bonus wheel spices up the additional spins and makes the slot stand out. This is an Egyptian adventure well worth going on at Mega Casino.