Big Time Gaming’s Megaways mechanic has become one of the industry’s most defining features. No one does it quite as well as the company itself though, and that is evident in the Extra Chilli slot game. In this Extra Chilli review, we are going to look at how the slot utilises the feature as well as all of the other bonus options it has available.

As a Megaways title, the Extra Chilli game uses an enhanced grid size. The slot is played across six reels, with an additional sliding reel along the bottom of the screen. The Megaways mechanic means that the slot can offer up to 117,649 different ways to win on any spin. The slot has an RTP of 96.41%.

The action takes place in a colourful market, with many different aspects of South American and Spanish culture filling the background. It is complemented perfectly by an upbeat soundtrack that does such a great job of immersing you that you could end up leaving the game with a suntan.

How To Play Extra Chilli 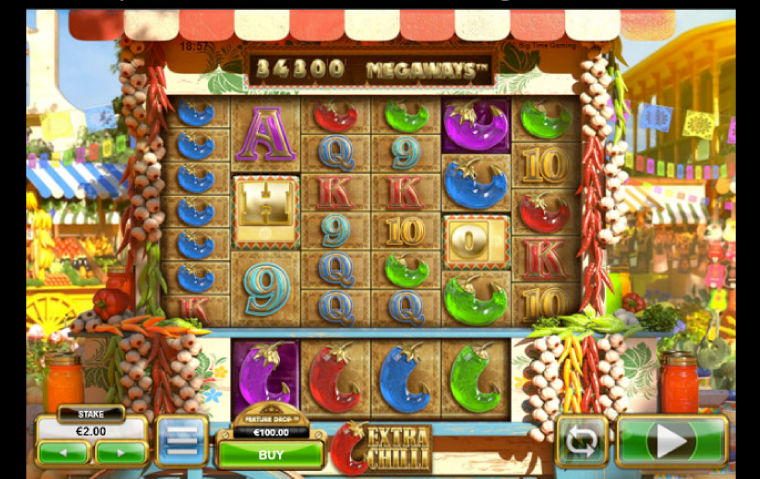 If you’ve never played a slot with the Megaways mechanic before, then no need to worry - it plays exactly the same as a standard slot game. The Chilli Heat slot can be played for anywhere between £0.20 and £50. The stake is adjusted in the bottom corner of the screen using the arrow buttons. There is also an autospin option if you want to just soak in the sun and let the game do the heavy lifting. You will find the paytable on the control panel if you need to find out the value of the symbols and how the game works.

This fiesta can continue onto your mobile device too. The game has been fully optimised to work on different screen sizes. Its colourful design jumps off the screen and it looks just as great on there as it does on a desktop. 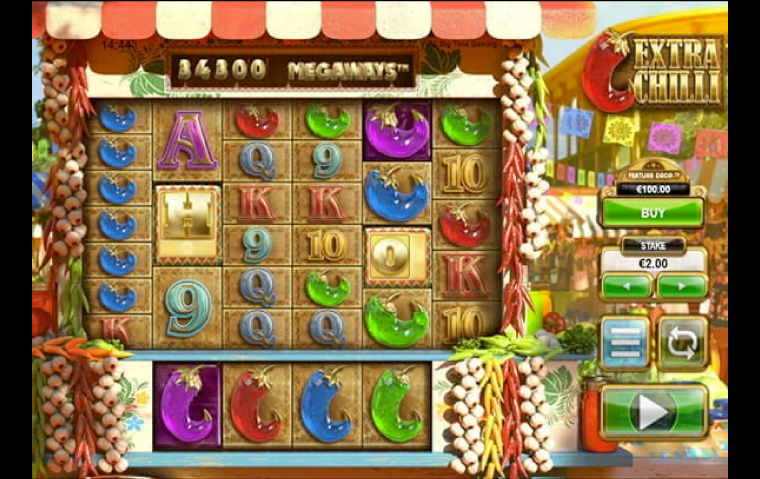 The Extra Chilli slot game comes with some useful bonus features outside of the main Megaways mechanic.

The reactions mechanic comes under different names in different slots but the principle remains the same. Whenever players land a winning combination, the symbols will disappear off the grid and new ones will tumble into their place.

The Extra Chilli bonus spins round is triggered when you land three or more scatter symbols. Players are given eight spins in the round, but there are given the chance to gamble these on the bonus spins wheel. Any extra scatters that lands during the round will hand out four additional spins. If you can land two extra scatters, then you will be given eight extra bonus spins. There are also win multipliers added during the round with no limit on the number that you can receive, which gives this slot some serious winning potential.

If you’re looking for an exciting online slot game that gets you in the mood to party, then the Extra Chilli slot game from Big Time Gaming is one well worth checking out. The slot’s colourful theme and great design really immerses you in the South American village the game is set in. It’s much more than just a pretty face though, with the Megaways mechanic and the bonus features complementing each other nicely, making this is a hugely enjoyable slot that can be played at Mega Casino.