The Epic Ape online slot game is an exciting slot designed and developed by the team at Playtech. The game takes players deep into the heart of the jungle where they will encounter the King-Kong inspired Epic Ape. The ape rules over the kingdom, providing players with 4,096 different ways to win and a selection of bonus features. Let’s find out if bigger means better in this Epic Apes slot review.

Playtech likes to make big slot games, and Epic Ape is another example of that. The slot’s design is kept simple, with the action unfolding in the jungle. The symbols are all beautifully designed animals, with the titular Ape being the highest paying of the symbols.

Where the Epic Ape game stands out is its larger than usual reels grid. The title takes place on a six by four grid. This allows the game to offer 4,096 ways to win on every single spin, which is a significant step up from what you will find in most online slots. The fact that these are active on every spin is also a selling point.

How To Play Epic Ape 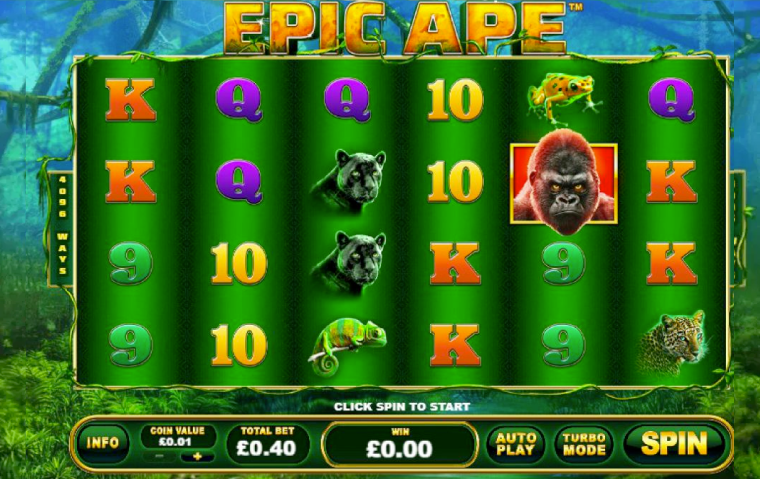 Epic Ape is not a difficult slot to play. Playtech has made the entire slot accessible on a number of different devices. Players can spin the reels for as little as £0.40 and as much as £80. There are 40 coins active on every spin, with the minimum coin value being £0.01 and the maximum being £2.

The slot is considered highly volatile and it offers a maximum win of 10,000x your slot. The RTP of the game is 95.96%. These are all solid numbers that are likely to appeal to slot enthusiasts. The fact that the game works perfectly well on different mobile devices is also going to appeal. Despite the bigger size of the reels, the game looks great on the smaller screen and Playtech has managed to ensure that all of the same bonus features and gameplay mechanics make the move as well. 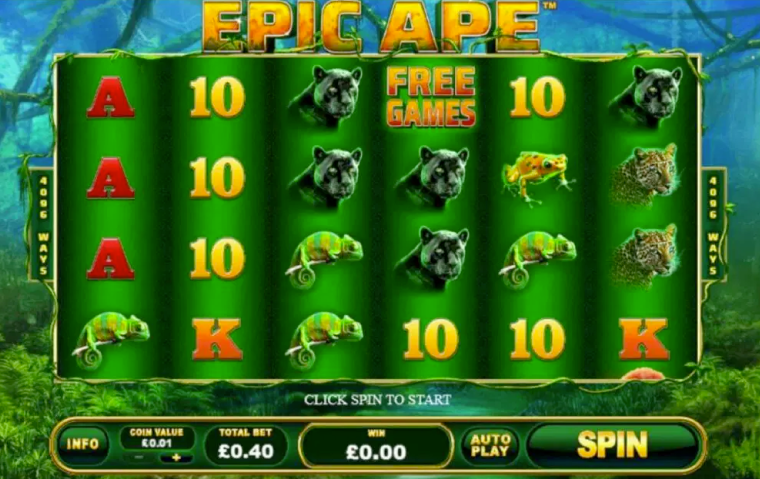 Playtech has not gone overboard with the bonus features in the Epic Ape slot, but this is not an issue, with the slot’s 4,096 ways to win feeling a bonus feature in themselves.

The bonus spins round in the game is launched when players land three or more of the scatter symbols on the reels. The number of scatter symbols that are landed will determine the number of spins that are rewarded. The maximum amount is 100, which is triggered with six symbols. This is exceptionally higher than what you would expect to find in a lot of top online slots and certainly helps the Epic Ape slot game stand out.

As well as this, players can also get more bonus spins by landing more scatters in the round. Once again, 100 spins are rewarded if six symbols land.

The Epic Ape slot game is a top-quality slot game from Playtech. The 4,096 different ways to win ensures players are in for an engaging gameplay experience, while the potential of landing 100 bonus spins in one go more than compensates for the limited number of bonus features. This is a well-designed and engaging slot game that is well worth taking for a spin on either desktop or mobile at Mega Casino.