Get ready to rock hard with the Demon slot game from Play’N Go. The developer has a record of producing top quality online slot games based on famous bands or songs. The company is responsible for the hugely popular Guns’ N Roses title among others. Demon is another great example of its ability to take a pre-existing property and do something interesting and original with it. Let’s raise our devil hands high and find out exactly how hard this slot rocks in this Demon slot review.

The band Demon may not be as widely known as some other bands with slots based around them, but that doesn’t mean they didn’t have a huge impact. The baand were a huge part of the British heavy metal scene, having been formed in 1979 by Dave Hill.

The slot doubles down on the band’s name and is set deep in the pits of hell. Like other music-themed titles, it uses a stage to host its five reels, with a virtual crowd gathered around the bottom cheering players on. Of course, it wouldn’t be a very good band-themed slot if it didn’t feature music from the titular act, with players able to select their favourite songs using a playlist option at the bottom of the screen

How To Play Demon As mentioned earlier in this Demon review, the title is set across five reels, each holding three symbols. It has 30 paylines, which keeps it in line with most standard top online slot games. These reels can be set spinning from £0.30 all the way up to £90, giving this a solid betting range that is likely to appeal to those with slightly higher budgets.

It also offers some good winning potential, the title has an RTP of 96.5%, putting it higher than the industry average. It features a maximum win of 5,000x the overall stake, which is a solid number that will please players.

Of course, if you want to rock out on your mobile, then Demon has you covered. The Demon mobile slot can be played on a range of different mobile devices including those on both Android and iOS. 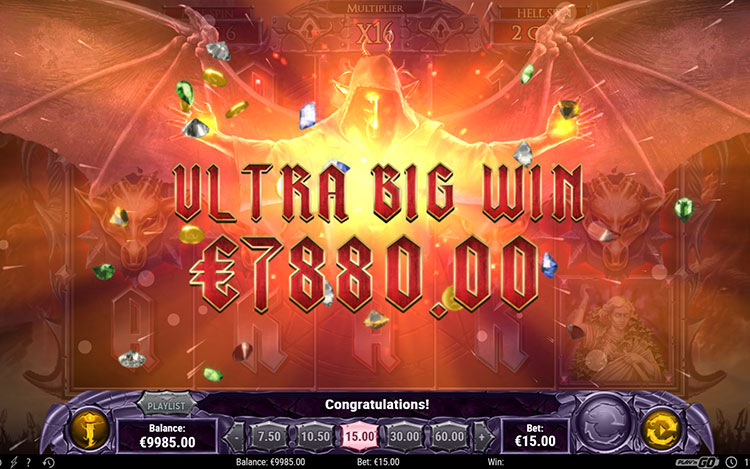 Play’N Go likes to load its slots up with bonus features, and Demon is no different. While it may not offer the plethora of titles found elsewhere, the main feature still makes a great addition to the overall gameplay.l

The main feature in the slot is the One Helluva Night Bonus Spins. This is triggered when players land the amulet symbols on reels 1 and 5, and the mask symbol on reels three. Players are rewarded with six spins, unless the mask lands right in the centre of the grid, in which case, players are given 11. During the round, there is a selection of random multipliers available at the top of the reels. These are randomly applied to wins after each spin.

The Portal to Hell feature is extra within the bonus spins round. This is launched whenever players land two more wild amulets on their reels. Eight extra spins are added, this time with a fixed multiplier. If a mask also lands alongside the two amulets, then ten extra spins are added.

Play’N Go really knows how to deliver a top-quality music-themed slot, and Demon is another example of this. The slot perfectly captures the anarchic, rock-hard spirit of the titular band, while also being welcoming to newcomers and general slot lovers. As well as boasting an awesome design, the main bonus spins round complements the overall gameplay nicely. This is a slot worth rocking out to at Mega Casino.