Since its inception, the Megaways mechanic has been one of the most influential changes in the iGaming and online slot landscape. An increased number of ways to win has driven players to new and exciting slot games, while other companies have attempted to create their own variations. The Buffalo Rising Megaways slot from Blueprint Gaming is one of the best examples of how to effectively utilise the mechanic. This games takes players on a trip out to the great American plains where the beautiful buffalo roam. It comes with some top bonus features and more. Let’s break it all down in this Buffalo Rising Megaways slot review.

The Great Plains of North America are the perfect setting for an online slot. Blueprint Gaming has done a fantastic job of bringing them to life in a way never seen before. The title is so detail-orientated that players can practically feel the dust rising up from the Grand Canyon like background.

Of course, the buffalo are not the only creatures that occupy these lands, and they are not the only ones that make an appearance on the slot’s 6x6 reel set-up. A beautiful wolf, a menacing bear, and a red-eyed bison also make cameos as the game’s symbols.

How To Play Buffalo Rising Megaways 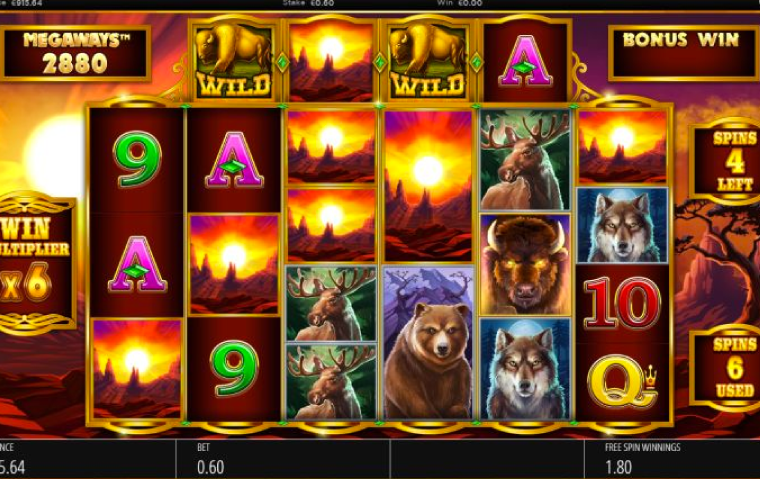 The Megaways mechanic is a reel modifier that allows for an increased number of ways for players to score a win. This leads to an increased reel size, as we have mentioned elsewhere in this Buffalo Rising Megaways review. As a result of this, the game offers players a whopping 117,649 different ways to win. These aren’t necessarily active on every spin, with the number changing depending on how many rows are in play.

The Megaways mechanic also uses a cascading win mechanic. Whenever players land a win, the symbols disappear from the grid and new ones will fall down. A multiplier is also applied. This resets when there are no wins left on the grid.

To have a chance of scoring a win on these lines, players will need to wager between £0.10 and £100. This is a healthy betting range that can be found in many top online slots. The RTP is higher than average though, sitting at 96.50%. The maximum win is also likely to grab some attention, with players able to score up to 50,000x their overalls take.

Fitting the Grand Canyon onto your mobile device may seem like an impossible task, but Blueprint Gaming has managed it. The Buffalo Rising Megaways mobile slot is a joy to play, with the gameplay experience making an easy transition from the big screen to smaller ones. 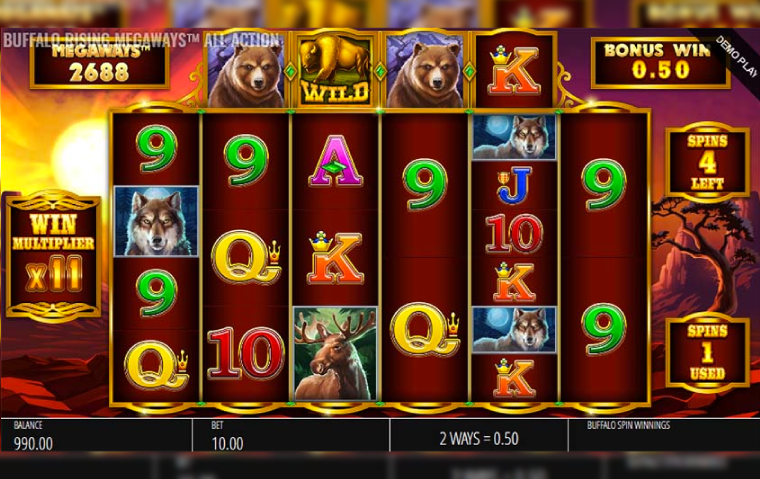 It’s not just the Megaways mechanic that helps this slot stand out. There are also some great Buffalo Rising Megaways bonus features on offer to help boost your winning potential.

A mystery symbol can land on any random spin. It is a sun setting over the landscape and it can transform into any other symbol when it lands. It can not transform into the slot’s scatter symbol.

The Buffalo Rising Megaways is a great example of how to use the Megaways mechanic effectively. It is one of the best Megaways titles available at Mega Casino. The game’s bonus features combine really nicely with the Megaways mechanic, making for an innovative and enjoyable slot experience.