Get ready for a fun little trip to the fair in the Big Wheel online slot game by Realistic Games. Fairgrounds and wheels, for obvious reasons, have always resonated with online slot players, and Realistic has mixed the theme with some old-school gameplay mechanics here. There’s nothing old-school about the bonus features here though, with the slot offering a good range. In this Big Wheel review, we are going to purchase a ticket to the fair and find out if the Big Wheel is one of its best attractions.

If you like old-school games, then there is going to be a lot about the Big Wheel slot that will grab your attention. The game has a classic 3x3 design, with just one solitary payline across the middle of the reels.

The reels are found inside a carnival tent at night-time, with some sort of rollercoaster sitting in the background. It boasts a really colourful design with some cartoonish elements. It really does a great job of capturing the fun spirit of a local fairground. The symbols on the reels also tie in with the old-school theme, with fruits such as grapes, oranges, and cherries making an appearance alongside the classic bell sign and the high-paying rubber duck.

How To Play Big Wheel 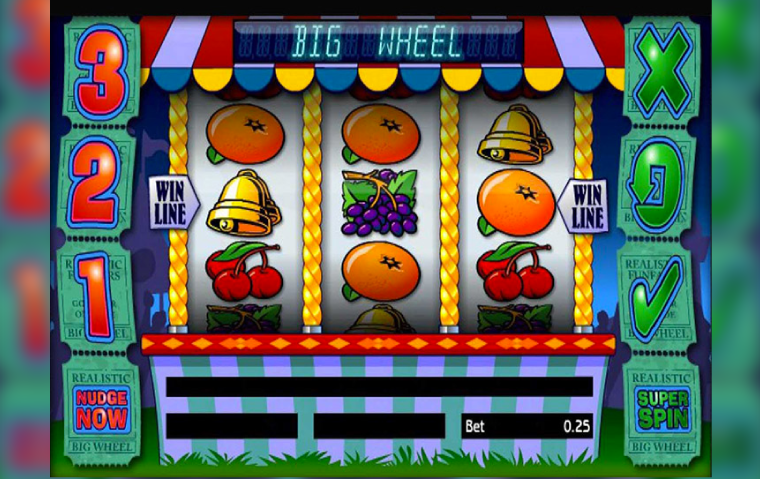 The Big Wheel slot keeps things nice and basic. With just the one payline active throughout, there is no need to worry about making adjustments before you spin the reels. You will, of course, need to choose your stake though. The minimum here is £0.05 and the maximum is £100. This is a really big betting range, with the minimum being lower than what can be found on many top online slots.

The slot also utilises a nudge feature to really round out that fruit-machine style. This allows players to nudge the reels up and down in order to land that coveted combination across the middle of the game.

The winning potential here is fairly modest, with the slot offering a maximum win of 300x the player’s overall stake with an RTP of 95.23%. The Big Wheel mobile slot can be accessed across a range of devices including both phones and tablets. 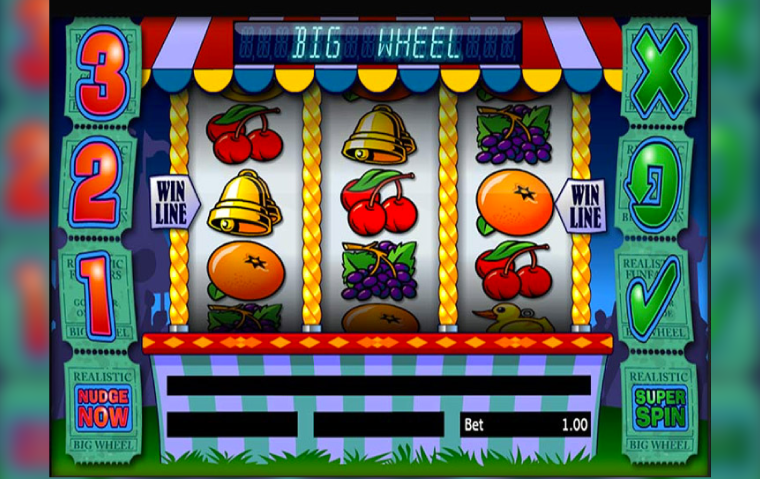 The Big Wheel slot may be old-school in a lot of ways, but Realistic has not cut corners when it comes to the bonus features on offer here. There are several bonuses that can be won. Whenever players land the Big Wheel symbol in the middle, they will get to spin the big wheel itself and get one of the following bonuses.

This bonus rewards players the maximum jackpot of 300x the total stake. Following that, players are then given nine chances to win it again.

For this, random prizes flash around a wheel. Players need to simply hit stop at the best time to get the biggest prize possible.

This is a progression style feature. Players are granted a number of steps and need to advance, collecting symbols and prizes.

The game ventures away from the one payline in the middle for this. A number of bonus spins are rewarded and the game has additional paylines where winning combinations can be secured.

This is a re-spin style feature where players can attempt to fill the game’s grid with the bell symbol.

In this game, players need to try and advance in a mini game to get the biggest prize possible. If they are caught three times in the mini-game, then it ends and the prizes are paid out.

On the face of it, it would be easy to assume the Big Wheel slot is just another three-reel title cashing in on its old-school set-up. This is not the case though, with the slot boasting a fun design and a great selection of bonus features. This makes it one of the best three-reel titles available at Mega Casino.