An exciting adventure into the rainforest awaits players in the Amazon Wild online slot game from Ash Gaming. This thrilling title takes players on a trip into the heart of the Amazon Rainforest in search of gold. Players are not alone though, a group of beautiful exotic animals join players along the way, as well as a small selection of bonus features provided by Ash Gaming. Grab your rainjackets as we explore what is on offer in this Amazon Wild slot review.

The Amazon Wild slot game is set deep in the heart of its titular rainforest. The beautiful natural setting creates the game’s backdrop, while beautiful creatures occupy the game’s 5x4 reel set. Players will encounter a parrot, a macaw, a toucan, a poison dart frog, a jaguar, and a monkey when they spin the reels here.

Ash Gaming deserves a lot of credit for the design of this slot. It manages to capture the beauty and scope of the rainforest while also being fun to look at. The developer has adopted an almost cartoon-like approach to the set-up, making sure that the game also has a little bit of quirk.

How To Play Amazon Wild 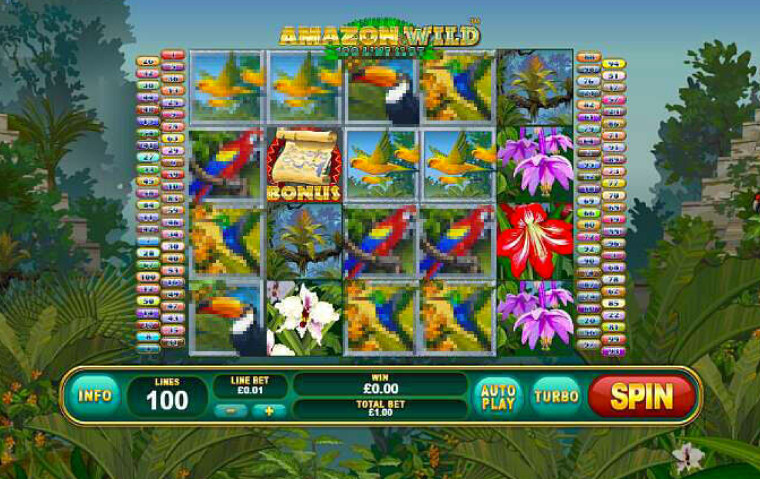 You don’t need to be an expert explorer to spin the reels in the Amazon Wild slot game and see what this great land has in store. As you will have seen elsewhere in this Amazon Wild slot review, the action takes place on a slightly enlarged 5x4 game grid. As a result of this, the slot has 100 different ways to win, which it markets as one of its key selling points.

Players can take this adventure into the rainforest for a reasonable betting range. The number of paylines can be adjusted, with players able to wager a minimum of £0.01 per line, totalling £1 with all lines active, and £1 per line, coming to £100. This gives players plenty of flexibility over the way that they play the slot.

The RTP on offer here is 94.16%, which may seem a little low to some players, but the game does make up for this a bit with a 2,600x maximum win being available. This is won by landing five of the slot’s scatters. The game is also available on a range of different mobile devices, with the Amazon still looking fantastic when it makes the move to the smaller screen. 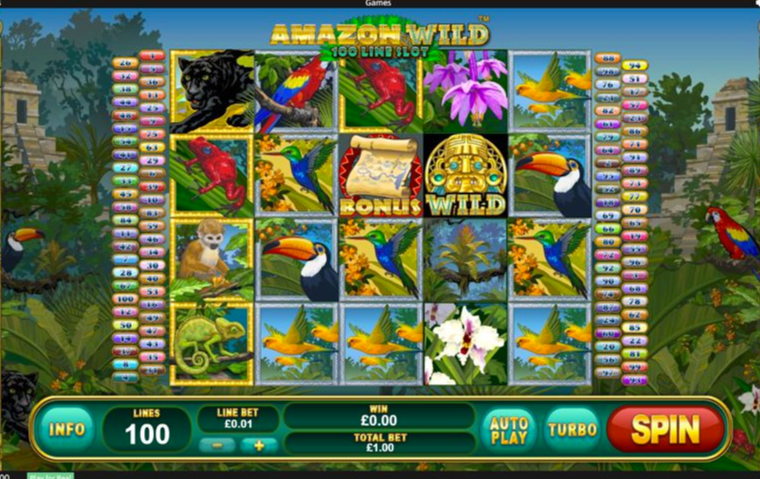 Amazon Wild comes with just one bonus feature, but it does give players the chance to land some of the best wins in the slot.

Scoring three of the game’s scatter symbols on one spin will grant access to the Amazon Treasure Bonus. For this, players are given a map of the Amazon depicting various ruins sites. Each of these sites will offer players a cash prize. Players will then get to choose the number of sites that corresponds with the number of scatters that triggered the round. While this might not score awards for innovation, it is a great addition to the game that seriously boosts the winning potential.

Ash Gaming may not be as well known as some larger developers, but it has produced a fantastic game in Amazon Wild. This slot game merges a fantastic design with a great bonus feature that gives players the chance to get their hands on some good potential wins. This is a trip into the Amazon well worth taking at Mega Casino.