The Battle of Thermopylae gave one of history’s most iconic last stands. The 300 Spartans who battled to hold off the Persian Army are the stuff of legend and it has been adapted in many different mediums, including, most famously, in the movie 300. As such, it was only a matter of time before the battle found its way onto an online slot game. The 300 Shields slot game from NextGen brings the slot to life in an entirely new way and throws in some good bonus features too. Let’s head into battle and see how the slot fares in this 300 Shields online slot review.

NextGen has opted to go for a striking design that really captures the bloodshed and the violence of the battlefield with the 300 Shields online slot game. The slot is set in the middle of the battle, with the two opposing sides occupying each border of the reels. It creates quite a cluttered look that really captures the chaos of war. The colour palette is also suitably foreboding, with the bronze shields and spikes sitting to a backdrop of a purple sky.

The action takes place on a 5x3 grid set-up, with the symbols in the game all highlighting the brutality of war. The shields and swords on the reels are brought to life with some bloody animations to really drive home the brutality. 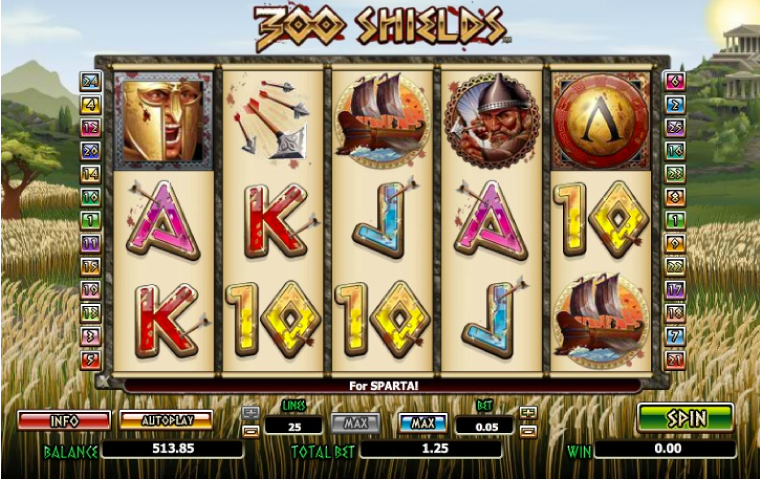 You don’t need to be a soldier in order to tackle spinning the reels in the 300 Shields slot game. The game has 25 paylines that is adjustable for each spin. The lowest amount that can be bet per payline is £0.01, while the maximum is £0.50. This gives the game quite a low betting range of £0.25 to £12.50 when all of the paylines are active.

Battling for the Greek Army certainly has its benefits. The slot offers a maximum win of 17,773x the overall stake, which is a significant amount. This can be won during the bonus rounds of the game. The RTP here is 95.3%, which is a little lower than average but the big winning potential elsewhere makes up for this. The slot is considered highly volatile.

Ancient Greeks may not have had mobile devices, but that doesn’t mean you can’t use yours to enter this battle. The 300 Shields mobile slot is just as engaging as the desktop version, with the game being available on both Android and iOS devices. 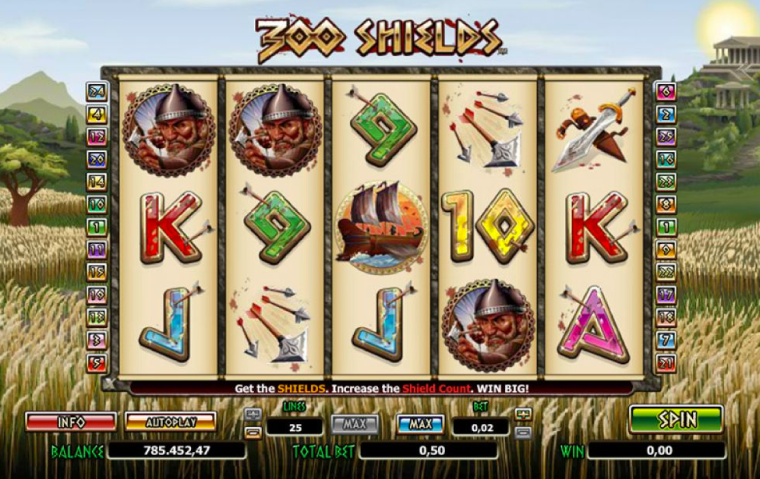 You’re going to need all the help you can get if you want to be successful in the 300 Shields slot game. The title comes with just one bonus feature, but it does manage to pack a serious punch.

When three or more of the slot’s scatters land in one go, five bonus spins are rewarded. There are various features within the round itself as well. Any wins featuring a Warrior WIld will be instantly doubled. More shields on the reel will trigger extra spins with additional multipliers. The maximum is 12 symbols, which will hand out a 300x the win multiplier with any Warrior Wild wins.

The 300 Shields slot game from NextGen is a top-quality war-themed title. The visuals here are striking and the gameplay is simple but immersive. The bonus feature, while being the only one in the game, has plenty to offer, with the Warrior WIld multipliers offering some great winning opportunities. This is a Greek-themed title that is worth hunting down and taking into battle at Mega Casino.