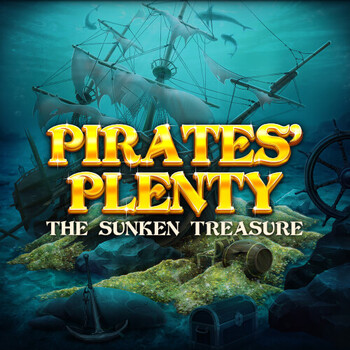 Shiver me timbers! Grab your crew and set sail on the seven seas as you go hunting for lost treasure in Pirates Plenty online slot game. Prepare to take on everything the ocean has to throw at you as you attempt to get your hands on all of the riches that it has hiding beneath its waves.

Join the pirate captain and his crew as you set sail on a voyage to the bottom of the ocean in search of riches beyond your wildest imagination in this visually innovative and enjoyable slot put together by the team at Red Tiger Gaming. Pirates Plenty slot online was developed by the team at Red Tiger Gaming. The game takes place on a boat wreckage miles beneath the ocean’s surface, with nothing but the spirits of dead pirates to keep you company on your quest for gold.

The reels of the game are set inside the belly of a sunken wreckage and the game is full of haunting and innovative visuals and animations. Two lanterns hang either side of the reels, creating an eerie atmosphere and playing experience. The ghost skulls of dead pirates linger over the reels, giving you a brief glimpse into the horrors that await at the bottom of the sea.

It’s not all doom and gloom though, as the pirate and his mischievous monkey are there to keep you company and provide you with plenty of help on your search for gold.

Pirates Plenty is a swashbuckling adventure that provides you with plenty of chances to win some cash, but before you do, you need to select your stake. Once you have chosen your coin size and the number of coins you want to stake, then you can get started on your voyage.

Pirates Plenty online slot game has 5 reels and 20 pay lines, with a sixth reel being unlocked later in the game. The symbols in the game are all pirate-themed, with the lower symbols in the game being the classic poker symbols on gold coins. Next up an old pistol, a pirate’s hat, a smoking cannon, a bottled grog and a pirate skull.

On top of these symbols, there are also the game’s three wild symbols - the pirate’s monkey, the bottled ship and the ocean spins symbol, all of which have their own special function.

The captain and his crew have plenty of special features on offer in Pirates Plenty online slot game. One of the most exciting features the game has is the treasure reel. This is a sixth reel that will open at the side of the reels once you have landed a map symbol on the original five reels. Once unlocked, this reel will remain open for the remainder of the game.

The Ocean Spins feature is another huge bonus that the game has in store for you. This feature is unlocked when you land three ocean spins symbols on the game. This will take you to a second screen which is set to the wreckage of a sunken ship. In this round, you must land pirate symbols to receive the keys to some secret treasure chests in order to win some free spins.

The game also features some expanding wilds which come in the shape of bottled pirate ships. These wilds will expand to cover the whole reel and can you help you win some impressive prizes.

If you want to put your feet up and enjoy your voyage across the seven seas, then you can use the game’s autoplay feature. The feature allows you to set the game to auto-play between 10 and 100 spins at a time. The main character in Pirates Plenty is the ghostly pirate captain. The captain floats around the wreckage of his sunken ship, helping you look for any treasures that may still be remaining there.

The captain is not alone though, he has his trusty little monkey to keep him company down there. The mischievous monkey is also on hand to help you out when you need it, and he steals low paying symbols and replaces them with higher-paying symbols for you during the game.