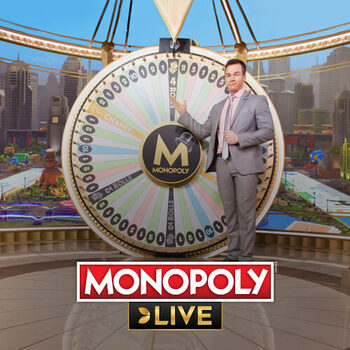 It’s time to blow the dust off your old Monopoly board and prepare to revisit one of the most iconic board games of all time. Evolution has brought this game to life in an entirely new way, taking classic elements of the board game and combining them with the thrills of their popular Dream Catcher game. Monopoly Live broadcasts from one of Evolution’s live TV studios, with players watching the host spin a giant wheel and trying to guess what number it is going to land on. That’s not all though - the live casino game also comes with a few added twists such as the addition of chance segments inspired by the original game. During the game, players can also launch an excellent bonus game that recreates the magic of the original board game, with Mr. Monopoly himself making an appearance to help you around the board. The Monopoly Live game is broadcast live from one of the developer’s studios, and getting to grips with how to play it couldn’t be easier. The game is presented by an experienced host, who is in charge of spinning the wheel and keeping you involved in the action. The wheel is a classic bonus wheel full of numbers, with a few extra additions to tie in with the Monopoly theme. Players must try and guess which number they think the wheel is going to land on in order to win a prize.

As well as numbers though, there are added Monopoly bonuses as part of this live game show. These include chance squares, which can trigger instant-wins and multipliers, and tiles marked ‘2 Rolls’ and ‘4 Rolls’. These two will trigger a Monopoly bonus game. A 3D version of the Monopoly board game will appear, with Mr. Monopoly acting as your token on the board. He will move around collecting multipliers based on the outcome of the dice rolls that you won to trigger the round. You can also get lucky and land a few extra rolls if you manage to land a double. You can also expect to encounter other familiar symbols like the Go and Community Chest along the way as well.

On the wheel, there are two tiles marked CHANCE inspired by the classic chance card you can find in the board-game. Whenever the wheel lands on one of these, it will reward either a multiplier or a cash prize. If it is a multiplier, then the host will spin the reel again to determine the amount you will win. If you are lucky enough to land on chance again, then this will boost the multiplier or the prize. If you land on either of the aforementioned roll segments, then winnings from the bonus game will then be multiplied, which can lead to some lucrative payouts if you’re lucky.

If you are lucky enough to land on either the 2 or 4 rolls symbols during the main game, then you will be whisked away to play the Monopoly LIve bonus round. This round takes place on a 3D version of the old-school Monopoly board, with players getting the chance to roll the dice and help Rich Uncle Pennybags get around the board. During this round, he will collect multipliers and bonuses for you, as well as encountering all of the old classic features like the jail square, chance cards, and more. Those who love Monopoly are going to have a great time playing the game in an entirely different way.

Evolution is seen as something of a standard-bearer when it comes to live casino games. The company has developed a huge range of different live-dealer options, all of which have been met with praise from all corners of the industry. Their partnership with Hasbro has allowed them to release several licensed products including, of course, Monopoly Live. This isn’t the only live game show style game they offer though either, with popular titles like Dream Catcher also having been developed by the studio. All of their titles feature excellent HD streaming, and all of the dealers and hosts that you will encounter when playing are of the utmost professionalism. You can find a range of Evolution games here at Mega Casino. Yes. Here at Mega Casino, all of our casino games online, live or otherwise, can be played for real money, and Monopoly Live is no exception.

Yes. Evolution upholds the strictest rules and regulations set by the UKGC. All of their products are fair and totally random.

Is Monopoly Live available on my mobile device?

Yes. All of our live casino products can be accessed on player’s mobile devices. The quality of the gameplay will not be affected when you make the transition from one screen size to another and the same gameplay features also remain available.

If you’ve enjoyed playing Monopoly Live, then you should check out the range of other exciting live casino game shows we have available here at Mega Casino. We work with some of the best developers in the industry, including Evolution, to bring a wide selection of different online game show titles to our customers. Sign-up today to see what we have in store.