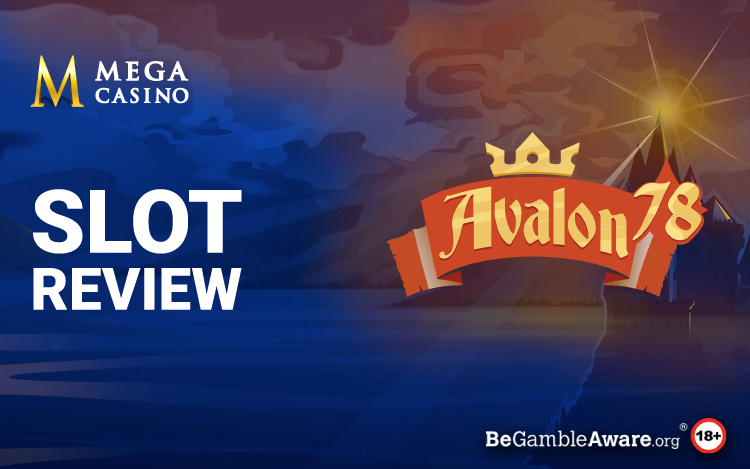 Avalon may not be the first word you associate with the legend of King Arthur, but this tiny little island plays a pivotal role in his rise to the top. Avalon is the place where his sword was crafted, and it is also where he was laid to rest. It is also home to the Lady in the Lake, the beautiful woman who protected the sword and who makes an appearance in this slot game. Microgaming has chosen to focus on this unique part of the story and bring it to life in the Avalon slot game. Let’s see what magic it has to offer in this Avalon slot review.

The Avalon slot game is based around a hugely successful land-based slot machine of the same name. Microgaming has done a great job of bringing it to life in a new way and capturing a different side of the story for an online audience.

The graphics on the slot are a little dated but they manage to maintain their charm regardless. The reels are all decorated in a royal blue colour, and the symbols are all linked to various aspects of Arthurian legend. The game has 20 paylines, all of which are clearly marked around the reels, wrapping up the game’s slightly old-school look and feel. The slot definitely feels like a slot machine, which is presumably Microgaming’s intention here.

The symbols in the game, which can be checked in the paytable, consist of things like the sword itself, the Lady in the Lake as the wild, and various other royal related imagery such as a coat of arms and a crown.

How To Play Avalon

Microgaming has kept the gameplay here nice and simple. The game can be played for anything between £0.40 and £200, giving it a pretty healthy betting range. The reels themselves are set on a 5x3 grid, with the aformentioned 20 paylines being active on every spin.

Despite its somewhat dated feel, the slot can still be accessed on a number of different devices including phones and tablets. In our experience, the Avalon mobile slot was just as fun as the desktop version of the game.

When it comes to winning potential - the game has some fairly solid numbers on display. The maximum win is 30,000x your total coin stake. It also offers players an RTP of 96%, which puts it around the industry average.

The Avalon slot has just one bonus feature to help players out. While this may disappoint some players, it actually packs some good winning potential.

The main Avalon bonus feature is a free spins round. This is triggered when you land three or more scatter symbols - with 12 spins being handed out. This isn’t just a normal bonus spins round though - the slot also adds multipliers to each win of up to 7x the total amount. The multiplier that is added is totally random.

Microgaming has opted to explore a fairly uncommon and interesting piece of Arthurian legend and it is one that helps to make the game stand out from other slots. The Avalon slot game definitely feels dated, but with the bonus multipliers being added to the free spins round, the winning potential here is strong. The slot also makes an easy transition to mobile devices, meaning you can try it at Mega Casino wherever you happen to be.